It’s a leap year, so we get an extra day to stream, binge, or take our sweet time watching new and returning British and Canadian TV offerings in February. 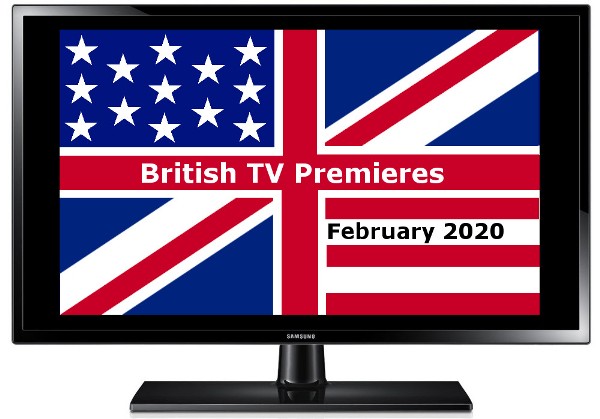 Experience the wonder of nature from the comfort of your own home as this factual series returns to telly from Cairngorms National Park. Against the snow-laden landscape, each species observed demonstrates what it takes to survive in freezing temperatures. Presented by Chris Packham, Michaela Strachan, and Gillian Burke, Winterwatch 2020 premieres in North America on Saturday, February 1, exclusively on BritBox. (Video is from 2015)

Celebrity chat show host Graham Norton has his first outing as host of the ceremony for the prestigious BAFTA Film Awards, to be held at the Royal Albert Hall in London. The Best Film nominees include 1917, The Irishman, Joker, Once Upon a Time in Hollywood, and Parasite. The 2020 BAFTA Film Awards airs in the US on Sunday, February 2, at 9:10 PM ET/PT, on BBC America. (Video is from 2018 awards)

In this documentary series, historian, curator, author, and program presenter Lucy Worsley (Tales from the Royal Wardrobe) delves into the seductive history of British romance and reveals the social, political, and cultural forces that shaped ideals of romantic love during the Georgian and Victoria eras, including the novels of Jane Austen. A Very British Romance with Lucy Worsley premieres in the US on Sunday, February 9, at 8 PM ET, on PBS.

Based on the best-selling novels by the late, great M. C. Beaton, this comedic cozy mystery series returns with three new feature-length episodes starring Ashley Jensen as Agatha, now officially a private investigator with her own detective agency. “The Deadly Dance” premieres in the US on Monday, February 10, followed by “The Love from Hell” on February 17 and “As the Pig Turns” on February 24 — all exclusively on Acorn TV.

After the confrontation that closed Season 1, this crime thriller returns with Bancroft (Sarah Parish) promoted to Detective Chief Superintendent and heading up a newly-merged police force, but still under the watchful, suspicious eye of Superintendent Walker (Adrian Edmondson). When a double murder reveals a personal connection, Bancroft is confronted with a new enemy, and the repercussions of her past return to haunt her. Bancroft: Season 2 premieres in the US on Tuesday, February 11, exclusively on BritBox. 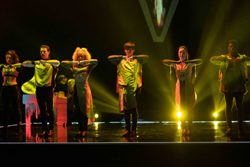 Set amidst the charred ruins of Earth in the not-too-distant future, this sci-fi/music drama follows a group of teens who are chosen to compete in the prestigious Exemplar performing arts competition in the seemingly idyllic colony of New Babyl. When they stumble upon a hidden archive of cultural relics, they are forced to question everything they have been taught, and use the power of music to ignite change and expose the truth. Utopia Falls premieres in the US on Friday, February 14, on Hulu. (Photo by Brooke Palmer/Hulu)

Based on The Fiery Cross, Book 5 in Diana Gabaldon‘s best-selling “Outlander” novels, the new season of this fantasy-romance drama finds the Frasers fighting for their family and home. Jamie (Sam Heughan) must defend all that he’s created in America, and Claire (Caitriona Balfe) must use her modern medical knowledge and foresight to prevent her family from being ripped apart again. Outlander: Season 5 premieres in the US on Sunday, February 16, at 8 PM ET, on Starz.

War of the Worlds (UK-France-US)

Loosely based on H. G. Wells‘s novel and set in present-day Europe, this sci-fi thriller finds astronomers getting definitive proof of intelligent extraterrestrial life, only to become victims when the aliens wipe out most of mankind in a crushing attack. As they hunt and kill those left alive, survivors are left wondering who the aliens are and why they want to destroy humanity. Starring Gabriel Byrne (Quirke), Elizabeth McGovern (Downton Abbey), Léa Drucker (The Bureau), Adel Bencherif (The Little Drummer Girl), Natasha Little (The Night Manager), Daisy Edgar-Jones (Cold Feet), and Stephen Campbell Moore (Traitors), War of the Worlds, an Epix Original series, premieres in the US on Sunday, February 16, at 9 PM ET, on Epix.

Year of the Rabbit (UK-US)

This award-winning comedy-drama returns with fifty-somethings Adam (James Nesbitt), Karen (Hermoine Norris), David (Robert Bathurst), Pete (John Thomson), and Jenny (Fay Ripley) continuing to deal with the dramas, traumas, and entanglements in their lives, from jury duty to cancer. Cold Feet: The New Years: Season 4 premieres in the US on Tuesday, February 25, exclusively on BritBox. (Video is from Season 3)

The new season of this sports documentary series follows all ten F1 teams and their drivers at every stage of the 2019 FIA Formula One World Championship. The show takes viewers behind the scenes with the drivers, team principals, and owners as they offer a unique perspective on their lives both on and off the track, and highlights the tension and the glamour of the sport as each team fights to win the championship. Formula 1: Drive to Survive: Season 2, a Netflix Original series, premieres globally on Friday, February 28, exclusively on Netflix.

Restaurants on the Edge (Canada)

Chef Dennis Prescott, designer Karin Bohn, and restaurateur Nick Liberato team up in this reality series to transform failing waterfront restaurants in 10 countries into destinations that are connected to their communities and worthy of their jaw-dropping locations. Restaurants on the Edge, a Netflix original series, premieres in the US on Friday, February 28, exclusively on Netflix. (Photo courtesy of Netflix)

Titles in this section begin streaming on the dates shown below on Acorn TV and its digital channels, including the Acorn TV channel on Amazon. 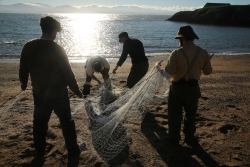 This BBC living history series follows four modern-day families as they go back to the start of the 20th century and try living as a rural fishing community on the wild, tidal island of Llanddwyn off the coast of Anglesey in Wales. It’s a time of hand-to-mouth existence as the families come face to face with the harsh realities of one of the toughest ways to make a living in 1900 Britain, including bad weather, lack of experience, and limited rations that lead to hunger and frustrations. The 1900 Island begins streaming Monday, February 3.

Based on Jonathan Gash‘s “Lovejoy” novels, this hugely-popular crime dramedy stars Ian McShane (Deadwood) as the eponymous rakish antique dealer gifted at sorting the real from the fakes. It’s a wild, unregulated world full of aristocrats, con men, and criminals — all of whom Lovejoy goes up against with the help of his young assistant Eric (Chris Jury, Doctor Who) and his upper-curst confidante Lady Jane (Phyllis Logan, Girlfriends). Lovejoy: Series 1-2 begins streaming Monday, February 3.

Philip Glenister (Life on Mars) stars in this thriller as Harry Venn, a solicitor who agrees to help a mysterious lawyer (Thekla Reuten, The Adulterer) find a missing alibi witness for her client. He unwittingly gets drawn into investigating the death of his brother twenty years ago, and finds himself caught up in a bigger and more complex conspiracy that reaches deep into the British political system. Costarring David Suchet (Poirot), Hidden begins streaming Monday, February 10. (Video is of an interview with Philip Glenister)

Genius of the Ancient World (UK)

Historian and author Bettany Hughes (Helen of Troy) hosts this documentary about three giants of ancient philosophy who lived between the 6th and 5th century B.C.: the Buddha, Socrates, and Confucius. Through her travels to India, Greece, and China, she reveals how these trailblazers embodied the shift from a primarily supernatural worldview, to one where rational thought offered new, exciting possibilities. Genius of the Ancient World begins streaming Monday, February 17.

This documentary tells the story of Lord Erne and his son, John, Viscount Crichton, who are determined to maintain their heritage and family home at Crom Castle in Co Fermanagh in increasingly difficult times. It follows John as he juggles his busy life in London with his responsibilities at Crom, the ancestral seat of the Crichtons for more than 400 years, and the setting for the BBC series Blandings. Keeping the Castle begins streaming Monday, February 24.

In the follow-up documentary, Viscount Crichton travels to Co Down to meet his cousins, Lord and Lady Dunleath, owners of Ballywalter Park, which has been in their family since 1846. Here viewers get insight into the pressures they face as they work to optimise the potential of the house and estate. Minding Our Manors begins streaming Monday, February 24.

What to Do When Someone Dies (UK)

Anna Friel (Marcella) stars in this drama as Ellie Manning, a schoolteacher trying for a baby with husband Greg (Marc Warren, Beecham House). He doesn’t return home from work one evening, but police show up to give her the terrible news that Greg was killed in car accident — along with the mysterious woman in the passenger seat. What to Do When Someone Dies begins streaming Monday, February 24.

Titles in this section begin streaming on the dates shown below on BritBox and its digital channels, including the BritBox channel on Amazon.

Nominated for 2 Oscars®, this film stars Judi Dench (Philomena) as Queen Victoria, who withdraws from public life as she mourns the death of her beloved Prince Albert. When his former servant, a brash Scot called John Brown (Billy Connolly, Made in Scotland), draws her back into the world, the two develop an unconventional friendship, causing a palace scandal that threatens to weaken the monarchy. Mrs. Brown begins streaming Friday, February 7, exclusively on BritBox.

Set at the Solana Resort in Benidorm, Spain, this comedy series follows holidaymakers as they descend on the fabulously tacky place, and the hilarity that ensues as the guests try to get the biggest bang for their buck. Starring Jake Canuso (Scarborough) and Janine Duvitski (Boy Meets Girl), Benidorm: Seasons 1-5 begins streaming Friday, February 14, exclusively on BritBox.

Based on the “Grantchester” stories by James Runcie, the latest season of this hit Brit mystery series opens in 1956, months after the events in Season 3. A troubled Sidney (James Norton, McMafia) leaves the village, and replacing him as both vicar and Geordie’s (Robson Green, Wire in the Blood) crime-solving partner is Will Davenport (Tom Brittney, The Five), a motorcycle-riding, future-embracing man of the cloth. Grantchester: Season 4 begins streaming as a Prime Video offering on Tuesday, February 25.

Titles in this section begin streaming on the dates shown below on Sundance Now and its digital channels, including the Sundance Now channel on Amazon.

For details about the February premieres of shows from Australia and New Zealand, visit The Down Under TV Place. For those about the debuts of original-language, English-subtitled programs from Europe, visit The Euro TV Place.