Ghosts and goblins are at play in October, bringing 17 new British TV series, seasons, and specials to stateside audiences. 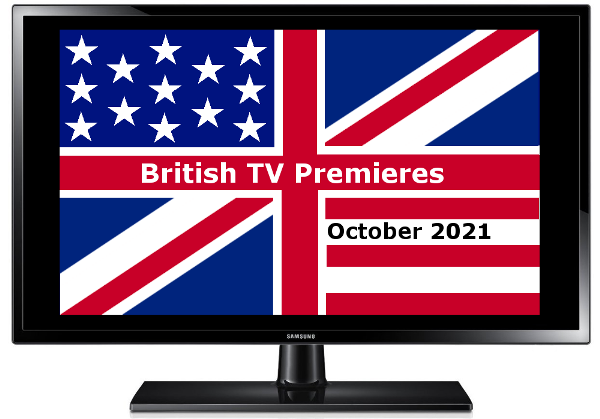 For updates about shows from the UK, Canada, and Ireland added to US linear TV and streaming channels throughout the month, see the British TV Viewing Guide.

All or Nothing: Toronto Maple Leafs (Canada)

Hit the road in a classic car for a tour through Great Britain, as experts pair up to search local stores for antiques and collectibles, competing to see whose finds will make the biggest small fortune at auction. (For further details, read this article.) Antiques Road Trip premieres in the US and Canada on Friday, October 1, on the PBS Living channel. (Photo credit: STV Studios) 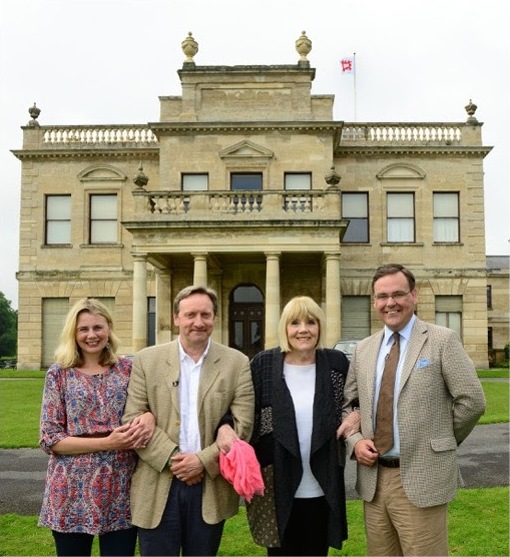 In this Antiques Road Trip spinoff, celebrities take to the road in classic cars on tours through different parts of Great Britain. With antiques experts by their sides, they search local stores for hidden treasures, competing to see who will make the most when they bring their items to auction. (For further details, read this article.) Celebrity Antiques Road Trip premieres in the US and Canada on Friday, October 1, on the PBS Living channel.

Escape to the Chateau: Season 7 (UK)

Filmed during the Covid lockdown, the latest season of this reality series finds no guests, weddings, or other events at the French chateau, so British transplants Angel and Dick Strawbridge turn their attention to tackling their to-do lists. Escape to the Chateau: Season 7 premieres in the US on Friday, October 1, exclusively on Peacock. 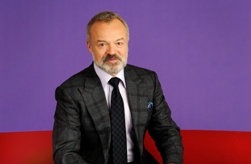 This BAFTA-winning talk show returns with a packed lineup of celebrity guests, laugh-out-loud stories, and exciting musical performances. The new season opens with Daniel Craig and No Time to Die costars Rami Malek, Lashana Lynch, and Léa Seydoux, plus musician-actor Ed Sheeran. The Graham Norton Show: Season 29 premieres in the US on Friday, October 1, at 11 PM ET, on BBC America and the AMC+ streaming bundle. (Photo courtesy of BBC America)

Set in 1966, the new season of this hit drama finds interesting challenges for the midwives and nuns of Nonnatus House, while the women’s rights movement intensifies and celebrations occur across the country as England wins the World Cup. Call the Midwife: Season 10 premieres in the US on Sunday, October 3, at 8 PM ET, on PBS (check your local listings). (Viewers with access to PBS Passport can stream it now.)

In the opener of this hit mystery series’ new season, Will (Tom Brittney) and the vicarage family, along with cop Geordie (Robson Green) and his family, are on a much-needed summer break at Merries Holiday Camp when the camp’s owner is found dead under suspicious circumstances. Grantchester: Season 6 premieres in the US on Sunday, October 3, at 9 PM ET, on PBS (check your local listings) and the PBS Masterpiece Prime Video Channel.

This reality/dating series returns with six new singles who strip away superficiality for a string of cheeky and charming costumed speed dates. Sexy Beasts: Season 2, a Netflix Original series, premieres globally on Thursday, October 7, exclusively on Netflix. (Video is from Season 1) 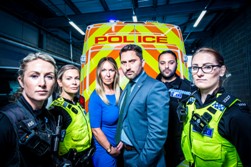 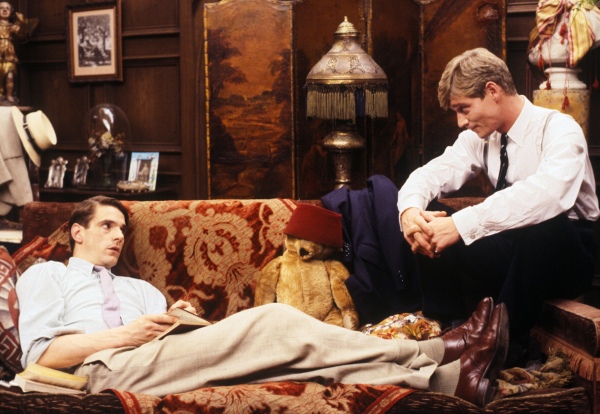 The release of 4K remastered Brideshead Revisited marks the 40th anniversary of the iconic miniseries. Based on Evelyn Waugh’s 1945 novel, it stars Jeremy Irons (The Borgias) and Anthony Andrews (Upstairs, Downstairs) (pictured left to right). (For further details, read this article.) Brideshead Revisited — Remastered in 4K premieres in North America on Tuesday, October 12, exclusively on BritBox. (Photo courtesy of BritBox)

In the new season of this crime thriller, the family of British ambassador Emma Chambers (Fiona Shaw, Killing Eve) goes missing while on a skiing holiday in Hungary. To help find them, detective Julien Baptiste (Tchéky Karyo) delves into the seedy underworld of Budapest. Baptiste: Season 2 premieres in the US on Sunday, October 17, at 10 PM ET, on PBS (check your local listings) and the PBS Masterpiece Prime Video Channel.

Martin Clunes (Doc Martin) reprises his role as DCI Colin Sutton in this true-crime drama that centers on the case of a notorious burglar and serial rapist who left thousands of elderly people in Southeast London living in fear for 17 years. (For further details, read this article.) Manhunt: The Night Stalker, an Acorn TV Original series, premieres in the US and Canada on Monday, October 18, exclusively on Acorn TV.

Doctor Who: Evil of the Daleks (UK)

In this animated recreation of another missing story from the BBC Archives (the final serial of Season 4 of Classic Doctor Who), the Doctor (Patrick Troughton) and companion Jamie (Frazer Hines) are kidnapped and taken to 1866, where they find the Daleks are going to use the Doctor as part of a plot to create a race of Super-Daleks. Doctor Who: Evil of the Daleks premieres in the US on Saturday, October 23, on AMC+.

Titles in this section begin streaming on the dates shown below on Acorn TV and its digital channels, including Acorn TV on Amazon.

Set against the backdrop of Newfoundland, this comedic crime drama revolves around the dysfunctional Doyle family as they try to make it all work running a father-and-son private investigative agency. The series is created by and stars Allan Hawco (Departure) as the roguish Jake Doyle, alongside Sean McGinley (Single-Handed) as Jake’s father and business partner, Malachy. Republic of Doyle: Season 4 begins streaming Monday, October 4.

In this docuseries, historian and author Dr. Sam Willis gives viewers a chronological portrait of the changing nature of crime in 17th- and 18th-century Britain. Using expert interviews and archival material, he demonstrates that highwaymen, pirates, and rogues were rarely outcasts from the fringes of society, but rather products of their time whose criminal activities were often shaped by powerful national events. Highwaymen, Pirates & Rogues begins streaming Monday, October 25.

Titles in this section begin streaming on the dates shown below on the AMC+ streaming bundle, available on Prime Video Channels and other digital services.

Before the Season 13 premiere (date tba), binge Jodie Whittaker’s second season as the Thirteenth Doctor, during which the Time Lord and her friends meet Nikola Tesla, go on a decidedly unrelaxing holiday, battle the Cybermen, and more. Doctor Who: Season 12 begins streaming Saturday, October 2. 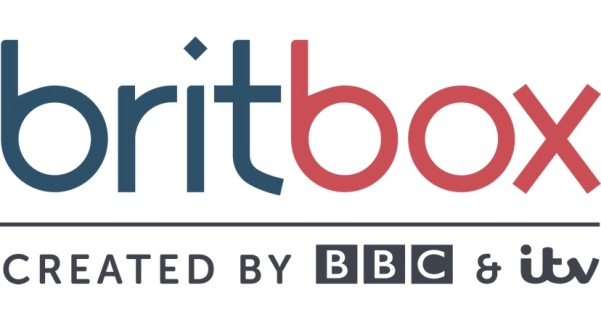 Titles in this section begin streaming on the dates shown below on BritBox and its digital channels, including BritBox on Amazon.

This award-winning political drama by Primetime Emmy® and BAFTA winner Andrew Davies’s (Little Dorrit, Bleak House) is a delicious tale of greed, corruption, and burning ambition. At its heart is Francis Urquhart (Ian Richardson, Porterhouse Blue), a ruthless, black-hearted politician who breaks the fourth wall to share with the viewer his innermost thoughts about destroying each of his political rivals. One by one his opponents tumble, until at last there is just one wild card left in the pack. The House of Cards Trilogy begins streaming Friday, October 15, exclusively on BritBox.

Titles in this section begin streaming on the dates shown below on the PBS Masterpiece Prime Video Channel.

Based on Nicolas Freeling’s “Van der Valk” series of novels, this crime drama stars Barry Foster (Death of an Expert Witness) as maverick Dutch policeman Piet Van der Valk. In Season 3, he has risen to be commander of the CID, and determined to be more directly operational than his rank requires. In Season 4, Van der Valk brings his dogged persistence to three cases that reach all levels of Amsterdam’s society and government. Van der Valk: Seasons 3 & 4 begin streaming Friday, October 8.

What to Do When Someone Dies (UK)

Anna Friel (Marcella) stars in this drama as Ellie Manning, a schoolteacher trying for a baby with husband Greg (Marc Warren, Beecham House). One evening he doesn’t return home from work, but police show up to give her the terrible news that Greg was killed in car accident — along with the mysterious woman in the passenger seat. What to Do When Someone Dies begins streaming Sunday, October 17.

Based on the Jean Rhys novel of the same name, a prequel to Jane Eyre, this telefilm stars Rebecca Hall (Parade’s End) as Antoinette Cosway, a Creole heiress in Jamaica, and Rafe Spall (The Salisbury Poisonings) as Edward Rochester, an Englishman who arrives at the island nation to stake out his fortune. After they marry, all is bliss with the newlyweds — until paranoid fear and betrayal lead to tragedy. Wide Sargasso Sea begins streaming Sunday, October 17.

This light police drama stars the late, great Richard Griffiths (Harry Potter) as DI Henry Crabbe, a 25-year veteran who wants to retire and serve up his signature steak and kidney pie at Pie in the Sky, his wife Margaret’s (Maggie Steed, Born and Bred) restaurant. But his ineffectual boss, ACC Freddy Fisher (Malcolm Sinclair, Parade’s End), won’t let him retire so easily, so Henry must do double duty as a copper and a chef. Pie in the Sky: Seasons 2-5 begins streaming Friday, October 29.

The Trouble With Maggie Cole (UK)

Set in the coastal town of Thurlbury, this dramedy finds local busybody Maggie Cole (Dawn French, Delicious) giving a journalist far more details (and embellishments) than he expected in a radio interview. In the days and weeks after the broadcast, Maggie sees the effects of her public gossip on the lives of people in the close-knit community. The Trouble With Maggie Cole begins streaming as a no-additional-charge Prime Video offering from Friday, October 1, through the end of the month.

Titles in this section begin streaming on the dates shown below on Sundance Now and its digital channels, including Sundance Now on Amazon.

Set against the backdrop of the Criminal Justice and Public Order Act of 1994, which banned unlicensed raves across the UK, this drama follows best friends and polar opposites Johnno (Cristian Ortega, Vigil) and Spanner (Lorn Macdonald, Shetland), who, realizing they are destined for different futures, sneak out to an illegal party for one last crazy night together. Beats begins streaming Monday, October 11.

For details about the October premieres of shows from Australia and New Zealand, visit The Down Under TV Place. For those about the debuts of original-language, English-subtitled programs from Europe, visit The Euro TV Place.

British TV Premieres in Oct 2021: The Canterville Ghost, Manhunt: The Night Stalker & More
Tagged on: 8 Out of 10 Cats    All or Nothing: Toronto Maple Leafs    Antiques Road Trip    Baptiste    Brideshead Revisited    Call the Midwife    Celebrity Antiques Road Trip    Doctor Who    Escape to the Chateau    Evil of the Daleks    Frankie Drake Mysteries    Grantchester    Manhunt    Our Cops in the North    Sexy Beasts    The Canterville Ghost    The Earthshot Prize: Repairing Our Planet    The Graham Norton Show