Nineteen new shows and seasons premiere nationally in the US in June, along with nine that debut on public TV stations in local markets across the country. 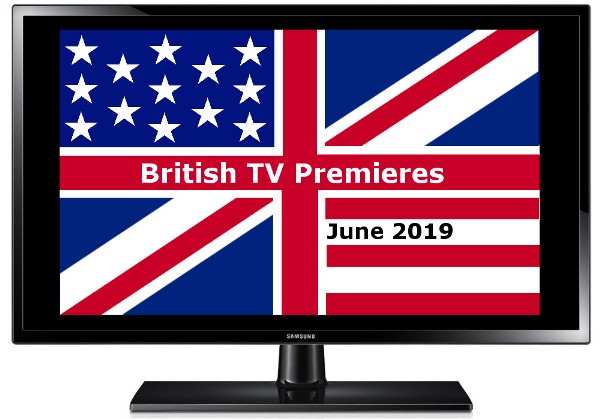 The new season of this drama finds attorney Joanna Chang (Kristin Kreuk, Smallville) starting fresh at a top law firm in Winnipeg. A new client there draws her into the shadowy world of hackers, activists, and a take-no-prisoners political movement — and she becomes a killer’s target. Costarring Peter Mooney (Rookie Blue), Burden of Truth: Season 2 premieres in the US on Sunday, June 2, at 8 PM ET, on The CW.

In advance of the fall premiere of the Downton Abbey film, PBS takes a look back at the award-winning series in this new special presented by Jim Carter, aka Mr. Carson, the Crawleys’ loyal butler. (For more details, read this article.) Downton Abbey Returns premieres in the US on Sunday, June 2, at 9 PM ET, on PBS. (Check your local listings)

The Luther drought is nearly over! In this new season, DCI John Luther (Idris Elba, The Wire) investigates a new spate of murders in London. As the seemingly indiscriminate killings become more audacious and public, Luther and new recruit DS Catherine Halliday (Wunmi Mosaku, Vera) are confounded by a complex tangle of leads and misdirection that seems designed to protect an untouchable corruption. Luther: Season 5 premieres in the US on Sunday, June 2, at 8 PM ET, on BBC America.

Based on the nonfiction book by Norman Ohler (pictured) and narrated by Steven Berkoff (The Girl with the Dragon Tattoo), this documentary shines a light on the Nazis’ experimentation with drugs during World War II, including Hitler receiving drug cocktails from his personal doctor and German troops getting methamphetamine pills. Blitzed: Nazis on Drugs premieres in the US and Canada on Monday, June 3, exclusively on Acorn TV. (Photo courtesy of Acorn TV)

Broadcast from locations across the UK, this popular nature series documents how British wildlife adapt during the changing of the seasons. More than 50 cameras, many hidden and operated remotely, allow viewers to get a glimpse of animals’ natural behavior. Presented by Michaela Strachan, Chris Packham, and Martin Hughes-Games, the new season of Springwatch premieres in North America on Monday, June 3, as a “Now” title exclusively on BritBox. (Video is from a previous season)

BBC News presenter Huw Edwards introduces live coverage of the world-renowned military spectacle from Horse Guards Parade to mark the official birthday of Her Majesty The Queen. This, her 66th event as sovereign, will feature the 1st Battalion Coldstream Guards trooping their colour in this annual display of music and majesty. Trooping the Colour 2019 premieres LIVE in North America on Sunday, June 9, as a “Now” title exclusively on BritBox. (Video is of the 2018 event) 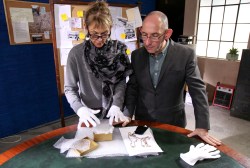 Criminal barristers Sasha Wass and Jeremy Dein re-examine real historical murder cases that sent men and women to the gallows but may not stand up against modern forensic techniques. If Wass and Dein believe they have a strong enough case, they present it to a senior Crown Court judge for a verdict on whether the original conviction should be upheld, or if perhaps there was a miscarriage of justice. Murder, Mystery, and My Family: Season 1 premieres in North America on Tuesday, June 11, exclusively on BritBox. (Photo by Lorna Hartnett © Chalkboard TV, courtesy of BritBox)

Set in 1920s Toronto, this mystery series (like a sister show to The Murdoch Mysteries) follows the city’s only female private detectives — Frankie Drake (Lauren Lee Smith, This Life) and her business partner Trudy Clarke (Chantel Riley, Wynonna Earp) — as they explore every cross-section of the city while working on cases the police don’t want to touch. Frankie Drake Mysteries: Season 1 has its linear TV premiere in the US on Saturday, June 15, at 9 PM ET, on Ovation TV.

The new season of this hit Brit mystery drama opens in 1969, eight months after the tragic events in the Season 5 finale. The Cowley station is closed, Morse (Shaun Evans, Silk) is sporting a mustache while back in uniform out in the coutryside, and Thursday is in a new role at Castle Gate CID. What hasn’t changed: murders in Oxfordshire, including those of a schoolgirl, an astrophysicist, a chocolate factory owner, and an Oxford librarian. (For more details, read this article.) Endeavour: Season 6 premieres in the US on Sunday, June 16, at 9 PM ET, on PBS. (Check your local listings)

Set in the early 1600s, the final season of this historical drama finds Jamestown’s trade booming and the tobacco farms thriving. But the settlers’ aspirations soon clash with the realities of creating a new nation on foreign soil. (For more details, read this article.) Starring Naomi Battrick (The Indian Doctor), Sophie Rundle (Gentleman Jack), and Niamh Walsh (Holby City), Jamestown: Season 3 premieres in the US on Sunday, June 16, at 10:30 PM ET, on PBS. (Check your local listings).

In this new series, Dame Penelope Keith (To the Manor Born) and her team of three expert village judges scour the country for the very best village — whittling down a “short” list of more than 400 applicants to the one they crown “Village of the Year.” Penelope Keith’s Village of the Year premieres in the US on Monday, June 17, with the first four of 24 episodes, exclusively on Acorn TV. The remaining episodes will debut in sets of four on successive Mondays.

This observational documentary series follows five Scottish farming families as they try to carve out a living in some of Britain’s most beautiful landscapes. From the couple who gave up careers as barristers to work on a remote island, to the family that has been raising sheep for ten generations, this precarious way of life attracts a wide range of people who must withstand all that the elements throw at them. This Farming Life: Season 2 premieres in North America on Tuesday, June 18, exclusively on BritBox. (Video is a compilation by BBC Scotland)

Season 2 of this thriller opens directly after that shocking Season 1 finale, with the Clios family enduring a second death and widow Georgina Clios (Julia Stiles, Dexter) still angling for power. What’s more, the truth about her past in America gets revealed. Joining the cast are Juliet Stevenson (Atlantis), Poppy Delevingne (Kingsman: The Golden Circle), Jack Fox (Sandition), Grégory Fitoussi (Spiral), Alex Lanipekun (Homeland), and Will Arnett (Arrested Development) as Georgina’s Uncle Jeff. Riviera: Season 2, a Sundance Now Original series, premieres in the US on Thursday, June 20, exclusively on Sundance Now.

This four-part series follows Martin Clunes (Doc Martin) as he embarks on a 10,000-mile journey — from Hawaii’s islands of fire and Alaska’s islands of ice, to the playgrounds of presidents off the New England coast — to discover what life is like on the the vast swathe of islands scattered beyond US shores. Martin Clunes’ Islands of America premieres in the US on Monday, June 24, exclusively on Acorn TV.

Created, written, and executive produced by Russell T Davies (A Very English Scandal), this drama follows an extended Mancunian family over 15 years, starting with one crucial night in 2019. Starring alongside Emma Thompson (Howards End), who plays a celebrity-turned-political figure, are Rory Kinnear (Count Arthur Strong), Russell Tovey (Him & Her), Jessica Hynes (There She Goes), Ruth Madeley (The Level), and Anne Reid (Ladies of Letters). Years and Years premieres in the US on Monday, June 24, at 9 PM ET, on HBO.

Co-written by and starring Jo Brand (Getting On) and Alan Davies (Jonathan Creek), this comedy set in the social services department of a local authority finds social workers Rose (Brand) and Al (Davies) battling bureaucracy, dealing with the absurdities of life, and trying to navigate their equally trying professional and personal lives. Damned: Seasons 1-2 premieres in the US on Tuesday, June 25, exclusively on BritBox.

Based on Daniel O’Malley‘s novel of the same name, this fantasy thriller series stars Emma Greenwell (Shameless) as Myfanwy Thomas, who has no memory of who she is and no way to explain the dead bodies around her. When Myfanwy discovers she is a high-ranking official in the Checquy, Britain’s last truly secret service for people with paranormal abilities, she must navigate the dangerous and complex world of the agency to uncover who wiped her memory — and why she is a target. Costarring Joely Richardson (Nip/Tuck), Olivia Munn (The Newsroom), and Adrian Lester (Hustle), The Rook, a Starz Original series, premieres in the US on Sunday, June 30, at 8 PM ET, on Starz.

You can find details about these shows, including their station lists, in this article.

NON-PREMIERE TITLES TO BE ADDED TO STREAMING SERVICES

Titles in this section begin streaming on the dates shown below on Acorn TV and the Acorn TV channel on Amazon.

Lee Remick (Days of Wine and Roses) stars in this biopic as Jennie Jerome, the famous American beauty who became Lady Randolph Churchill, the wife of a potentially great politician (Ronald Pickup, The Crown) and the mother of the most famous of all English politicians: Winston Churchill (Warren Clarke, Dalziel & Pascoe). Jennie: Lady Randolph Churchill begins streaming Monday, June 3.

Living in the Shadow of World War II (UK)

This three-part documentary explores the ups and downs of everyday life while the greatest war in history raged on. Living in the Shadow of World War II begins streaming Monday, June 3.

MyAnna Buring (Ripper Street) stars in this two-part drama as Karen Clarke, who reunites with her partner Rex (Matthew Goode, A Discovery of Witches) after his 12-year prison stint. But her plan of settling down in their seaside cottage is upended when she starts to receive calls and texts that indicate someone knows the real truth about her and Rex’s past. The Poison Tree begins streaming Monday, June 17.

Titles in this section begin streaming on the dates shown below on BritBox and the BritBox channel on Amazon.

BritBox has selected the best big-screen adaptations of Agatha Christie‘s most celebrated mysteries and is making them available all in one place for the first time. Running every Friday throughout the summer, BritBox kicks off its “Christie Summer Cinema” with a couple of classics from the ’80s.

Evil Under the Sun — Belgian sleuth Hercule Poirot (Peter Ustinov, Around the World in 80 Days) is called to find the culprit who murdered a narcissistic Broadway actor on a Mediterranean island. The cast includes Maggie Smith (Downton Abbey) and Diana Rigg (Game of Thrones). Evil Under the Sun begins streaming Friday, June 28.

For details about the June premieres of shows from Australia and New Zealand, visit The Down Under TV Place. For those about the debuts of original-language, English-subtitled programs from Europe, visit The Euro TV Place.