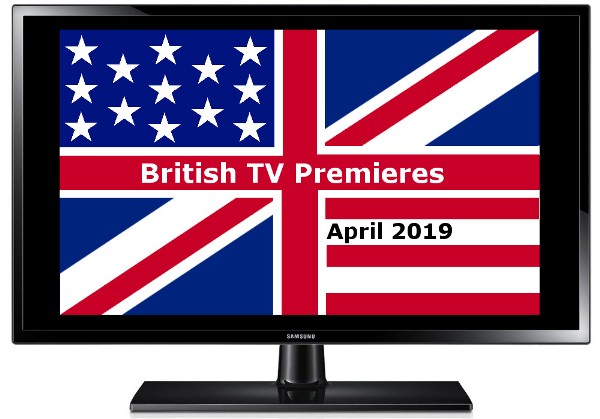 Based on first-person experience and the nonfiction books Bad Blood by Vic Parsons and The Gift of Death by Andre Picard, this eight-part historical drama chronicles the emergence of HIV and Hepatitis C in Canada in the early 1980s and the tragedy that resulted after thousands of people were infected by tainted blood. Starring Sarah Wayne Callies (Colony), Unspeakable premieres in the US on Thursday, April 4, at 9 PM PT, on SundanceTV.

Hosted since 2011 by horticulturalist Monty Don (now an OBE!), this perennially-popular gardening program returns with a new season that’s budding with inspiring ideas and down-to-earth advice. Gardeners World premieres in the US on Friday, April 5, exclusively on BritBox as a “Now” title. (Video is from 2017)

Narrated by Sir David Attenborough, this eight-part nature doc’s stunning ultra-high-def footage of rarely-seen animals is mixed with the somber truths about humanity’s impact on the Earth’s habitats and species. Filmed in 50+ countries, from exotic jungles to the deepest seas, Our Planet, a Netflix Original series, premieres globally on Friday, April 5, exclusively on Netflix. (You can add it to your queue now.) 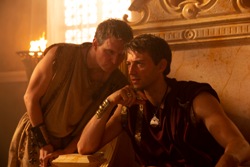 The new season of this docudrama centers on the Roman emperor Caligula, who shocked everyone by ruling with cruel depravity and debauchery. Roman Empire: Caligula: The Mad Emperor, a Netflix Original series, premieres in the US on Friday, April 5, exclusively on Netflix. (Photo courtesy of Netflix)

A Discovery of Witches (UK)

Based on the first novel in Deborah Harkness‘ “All Souls” trilogy, this supernatural drama follows Diana (Teresa Palmer, Hacksaw Ridge), a witch and historian whose discovery of a bewitched manuscript puts her in danger, as other creatures want it. In helping Diana to stay safe, vampire and geneticist Matthew (Matthew Goode, Downton Abbey) falls in love with her and vice versa. But now they’re both in danger. A Discovery of Witches makes its US broadcast debut on Sunday, April 7, at 9 PM ET, on BBC America and AMC.

In this two-part documentary, presenter Anita Rani heads to the Indian subcontinent to explore what goes on behind the scenes of Bollywood film productions. Bollywood is the largest film industry in, and the movie-making capital of, the world, turning out 1,000+ films each year — more than 2x as many as Hollywood. Bollywood: The World’s Largest Film Industry premieres in the US on Monday, April 8, exclusively on Acorn TV.

Survival expert Bear Grylls goes Bandersnatch in this interactive series, in which you, the viewer, will make key decisions to help him survive, thrive, and complete missions in the harshest environments on Earth. You vs. Wild, a Netflix Interactive series, premieres globally on Wednesday, April 10, exclusively on Netflix. (You can add it to your queue now.)

Set in the dark, early days of a zombie apocalypse, this new horror series follows complete strangers as they band together to survive and to fight their way back to loved ones. Jaime King (Hart of Dixie) leads the cast as Rose, who embarks on a harrowing journey to find her daughter. Black Summer, a Netflix Original series, premieres globally on Thursday, April 11, on Netflix. (You can add it to your queue now.)

Details about the final season of this megahit fantasy series are top secret, so all we can do is wonder about who will live and die, what will become of the dragons and White Walkers, who will win the battle for the Iron Throne, etc etc etc. Game of Thrones: Season 8 premieres in the US on Sunday, April 14, at 9 PM ET, on HBO.

There She Goes (UK)

David Tennant (Doctor Who) and Jessica Hynes (Twenty Twelve) star in this new dramedy as Simon and Emily, the parents of Rosie (Miley Locke, The Royals), their learning-disabled nine-year-old daughter. The show’s stories, characters, and situations are drawn from the real-life experiences of series creator and writer Shaun Pye (A Young Doctor’s Notebook & Other Stories), whose daughter was born with a rare chromosomal disorder. There She Goes premieres in the US on Tuesday, April 16, exclusively on BritBox.

Andie MacDowell (Four Weddings and a Funeral) joins the cast of this comedy series as Ivy, Ken’s (Greg Davies, Man Down) wealthy, long-lost half-sister, who arrives in England while Ken decides to run for Lichfield MP. Cuckoo: Season 5, a Netflix Original series, premieres in the US on Friday, April 19, exclusively on Netflix.

Set in the gorgeous chapel of King’s College Cambridge, this annual festival of services, concerts, and and talks for Holy Week and Easter features traditional choral performances and readings. Easter from King’s premieres in the US on Saturday, April 20, exclusively on BritBox as a “Now” title. (Video is from 2018)

Inspired by Maureen Jennings‘ “Murdoch Mysteries” novels, this hit period drama’s latest season opens with Murdoch (Yannick Bisson, “Aurora Teagarden” mysteries) and Ogden (Helene Joy, Durham County) hosting a housewarming party in their new home. But the festivities are cut short when a man dies in one of the rooms. Murdoch Mysteries: Season 12 has its US broadcast debut on Saturday, April 20, at 7 PM ET, on Ovation TV.

Created, written, and co-directed by Sally Wainwright (Happy Valley), this new eight-part period drama set in 1832 Halifax, West Yorkshire, stars Suranne Jones (Doctor Foster) as Anne Lister, a charismatic woman who aims to transform the fate of her faded ancestral home by reopening the coal mines and marrying well — but not a man. Based in historical fact, Gentleman Jack premieres in the US on Monday, April 22, at 10 PM ET, on HBO.

This reality series follows Ian Stuart, a multiple award-winning bridal and occasion wear designer, and his team as they help women find their dream dresses at his opulent 18th-century bridal boutique in London. The Posh Frock Shop premieres in the US on Monday, April 22, on Hulu.

Matt LeBlanc, Chris Harris, Rory Reid, and The Stig return for the latest season of this motoring series, in which the team discover the best supercar alternatives to the traditional family estate car from Ferrari and Porsche, race to the top of a mountain in a pair of the smallest 4×4s in the UK, and more. Top Gear: Season 26 premieres in the US on Thursday, April 25, at 9 PM ET, on BBC America.

Walton Goggins (Justified) leads the cast of this spy thriller’s new season as Nathan Miller, an ex-CIA operative. Joe Dempsie (Game of Thrones), Karima McAdams (Fearless), Alistair Petrie (The Night Manager), and Anastasia Griffith (Copper) return and are joined by Victoria Hamilton (The Crown) and Shelley Conn (Mistresses). Deep State: Season 2 premieres in the US on Sunday, April 28, at 9 PM ET, on Epix.

Inspired by Ann Cleeves‘ “Shetland” crime novels, the new season of this hit mystery series is a six-part original story. After a severed hand is found on the beach, DI Jimmy Perez (Douglas Henshall, Primeval) and his team investigate a complex murder mystery and later make a shocking discovery. Shetland: Season 5 premieres in the US on Tuesday, April 30, exclusively on BritBox.

American Public Television is releasing eight British TV programs in April, so they’re getting a their own article — “British TV Premieres on Local Public TV Stations in April 2019” — which includes a few details about the titles and the complete lists of the public TV stations and regional networks that are confirmed for airing them. Check it out!

NON-PREMIERE TITLES TO BE ADDED TO STREAMING SERVICES 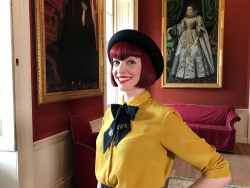 A Stitch in Time (UK)

In this six-part documentary, fashion historian Amber Butchart (pictured) examines figures from the past through the clothes they chose to wear in their portraits or effigies, including King Charles II and Marie Antoinette. And historical costumier Ninya Mikhaila and her team recreate garments using the tailoring techniques of the given period. A Stitch in Time begins streaming Monday, April 1.

Rumpole of the Bailey (UK)

This popular series follows the misadventures of Old Bailey defense barrister Horace Rumpole (Leo McKern, Reilly: Ace of Spies), who contends with politics in chambers, unhelpful judges in court, and his wife’s disapproval at home, all while working on behalf of often-ungrateful clients. Rumpole of the Bailey begins streaming Monday, April 1 (Series 1-2); April 15 (Series 3 + Special); and April 29 (Series 4-5).

Over the Rainbow (UK)

In this 1993 Britcom, Neil (Peter Sullivan, MotherFatherSon) returns from prison after serving time for his part in a burglary — which took place during his wedding reception — and finds his wife Finnoula (Angeline Ball, Keeping Faith) has moved in with his best friend Spence (Ian Targett, Monroe). Through force of circumstances, the three must find a way to live together. Over the Rainbow begins streaming Monday, April 15. 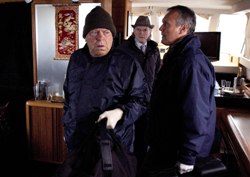 The crime dramedy stars Anthony Head (The Split) and the late, great Warren Clarke (Dalziel and Pascoe) as Maurice Riley and Syd Woolsey — retired master burglars whose homesickness in Spain causes them to return to England, where circumstances pull them back into a life of crime. Costarring Jenny Agutter (Call the Midwife) and Dean Lennox Kelly (Jamestown), The Invisibles begins streaming Monday, April 22. 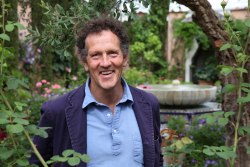 This documentary follows presenter Monty Don as he travels across the Islamic world and beyond — including Spain, Morocco, Iran, India, and Turkey — in search of paradise gardens. Along the way, he learns the building blocks of these gardens and more. Monty Don’s Paradise Gardens begins streaming Monday, April 22. (There’s a companion book, too.)

Off the Beaten Track with Kate Humble (UK)

In this travel documentary, presenter Kate Humble (My Sheepdog and Me) travels with her Welsh sheepdog Teg from the tip of North Wales through the most remote parts of the country, taking in the landscape and noting how it has influenced those who live there. Off the Beaten Track with Kate Humble begins streaming Monday, April 29.

BritBox celebrates the iconic series by pulling together the ultimate playlist of the ensemble cast’s past roles. The Box of Thrones event begins streaming Tuesday, April 9.

Sean Bean (Sean Bean! Broken) leads the cast of this thriller, in which he plays a former secret agent wrongly convicted of murdering his family, now on the run in the hopes of clearing his name. Costarring Juliet Aubrey (Snatch), Extremely Dangerous begins streaming Tuesday, April 9. (Photo © Picture Palace & all3media) 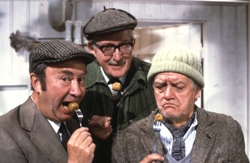 Compo (Bill Owen), Foggy (Brian Wilde), and Clegg (Peter Sallis) are Britain’s oldest and most unwise adolescents, and they’re up to their old tricks again (like starting a dog-walking business and selling junk food to Holmfirth residents) in these early seasons of the longest-running Britcom. The Last of the Summer Wine: Seasons 6-8 begins streaming Friday, April 26.

Titles in this section begin streaming on the dates shown below on Hulu.

See the description under Hulu above. Vikings: Season 502 begins streaming as a Prime Video offering on Tuesday, April 30.

For details about the April premieres of shows from Australia and New Zealand, visit The Down Under TV Place. For those about the debuts of original-language, English-subtitled programs from Europe, visit The Euro TV Place.