Before you laissez les bons temps rouler on Mardi Gras/Fat Tuesday, check out the new and returning British and Aussie programs this month, including a few highly-anticipated ones. 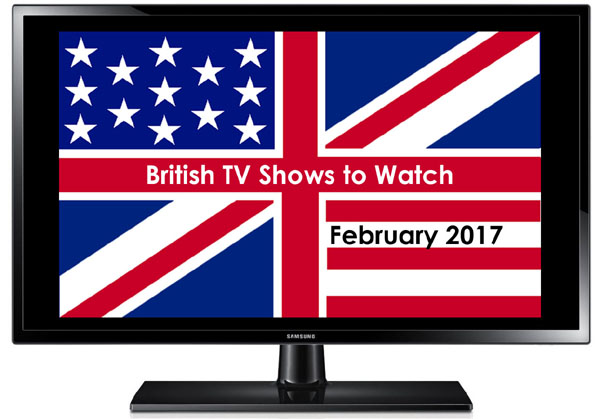 The Only Way is Essex: Series 17

Reality shows aren’t really my thing, but I have to give this scripted one props for having lasted 19 seasons and counting. Stateside fans of TOWIE will be glad to know that Series 17 is finally here, and it includes the show’s milestone 200th episode (minus a few of the series’ former regulars, plus some new faces). The Only Way is Essex: Series 17 premieres in the US on Wednesday, 1 February 2017, on Hulu. 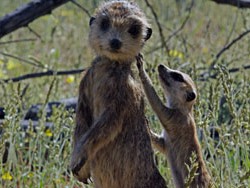 Spy in the Wild

More than 30 animatronic spy cameras disguised as animals, called Spy Creatures in this innovative nature documentary series, secretly record animal behavior in the wild and reveal that animals show emotions and behavior similar to humans —  from love and intelligence, to friendship and bad behavior. Spy in the Wild, a Nature Miniseries, premieres in the US on Wednesday, 1 February 2017, at 8 PM ET, on PBS. (Check your local listings.) (Photo courtesy of Richard Jones / © John Downer Productions) 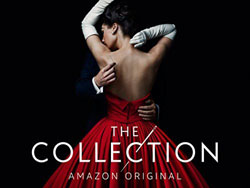 Set in a post-World War II French fashion house, this drama centers on two brothers, played by Richard Coyle (Coupling) and Tom Riley (Da Vinci’s Demons), whose clashes threaten to upend the atelier before they can achieve the goal of restoring the supremacy of Paris as the haute couture capital following its occupation by the Nazis. Featuring Frances de la Tour (Vicious), Michelle Gomez (Doctor Who), Alix Poisson (The Disappearance), and Jenna Thiam (The Returned), The Collection, an Amazon Original series, premieres in the US on Friday, 10 February 2017, exclusively on Amazon Prime Video. (Image courtesy of Amazon) 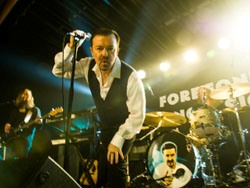 David Brent: Life on the Road

David Brent (Ricky Gervais, The Office) is putting his money where his mouth is: he cashes in his pension, takes unpaid leave from his traveling salesman job, and hits the road with his band, Foregone Conclusion, and a talented rapper (Ben Bailey Smith, Law & Order: UK) to pursue his dream of being a rock star. Of course he does this with another documentary film crew following him about. David Brent: Life on the Road premieres Friday, 10 February 2017, on Netflix. 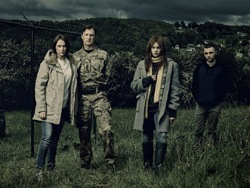 The first season of this BAFTA-nominated Best Drama Series was utterly gripping, and so is this follow-up, whose story is told over three timelines. It’s been 11 years since Alice Webster (Abigail Hardingham, Silent Witness) went missing, and now she’s back. For retired detective Julien Baptiste (Tchéky Karyo), her return raises questions but also hope for finding a missing French girl. For her family, it brings turmoil. Starring Keeley Hawes (The Durrells in Corfu) and David Morrissey (The Driver), The Missing: Season 2 premieres in the US on Sunday, 12 February 2017, at 8 PM ET, on Starz. (Photo © 2017 New Pictures Limited / Company, courtesy of Starz) 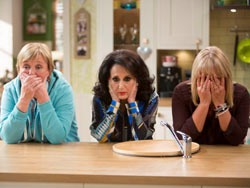 Birds of a Feather: Series 12

The third series of ITV’s revival of this iconic Britcom finds Sharon (Pauline Quirke), Dorien (Lesley Joseph), and Tracy (Linda Robson) up to their old tricks and getting themselves caught up in yet another series of misadventures, including a visit to an infamous drag club, attending a funeral populated by the most unsavory of characters, and a spot of domestic unrest. Birds of a Feather: Series 12 premieres in the US on Monday, 13 February 2017, exclusively on Acorn TV. (Photo courtesy of Acorn TV) 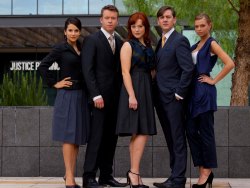 Costarring Marta Dusseldorp (A Place to Call Home) in her first outing as Janet King, this legal drama follows the young lawyers of the Office of Public Prosecutions, who find that their passion for justice collides with the realities of a system that struggles to protect the vulnerable. Crownies premieres in the US on Monday, 13 February 2017, exclusively on Acorn TV. (Photo courtesy of Acorn TV) 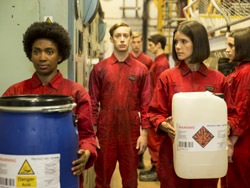 Opening several months after the events in Season 1, Season 2 of this BAFTA-nominated Best Drama Series finds Joe (Tom Goodman-Hill) and Laura (Katherine Parkinson) trying to mend their marriage; synths Mia (Gemma Chan), Leo (Colin Morgan), and Max (Ivanno Jeremiah) trying to find their place in the world while fellow synth Niska (Emily Berrington) is still at large with the consciousness code; and Dr. Athena Morrow (new cast member Carrie-Anne Moss, The Matrix), a preeminent AI expert, trying to create a new kind of machine consciousness. And there’s more besides, as the lines between human and machine become even blurrier and the question of what it means to be alive becomes harder to answer. Humans: Season 2 premieres in the US on Monday, 13 February 2017, at 10 PM ET, on AMC. (Photo by Colin Hutton / Kudos / Channel 4 / AMC) 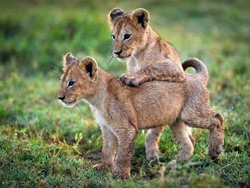 Rescheduled from its January premiere date, this Ultra Hi-Def sequel to Planet Earth takes us further into “Islands,” “Mountains,” “Jungles,” “Deserts,” “Grasslands,” and “Cities” to give us even closer views of nature in all its glory. Narrated by Sir David Attenborough, Planet Earth II premieres in the US on Saturday, 18 February 2017, at 9 PM ET, via simulcast on BBC America, AMC, and SundanceTV. (Photo by Tom Hugh-Jones, courtesy of BBC America) 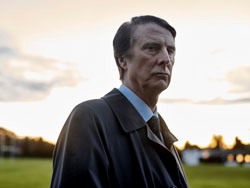 Code of a Killer

This fact-based drama — one of my favorite UK TV premieres of 2015 — stars David Threlfall (Shameless) as DCS David Baker, the first detective to use DNA evidence to catch a killer, and John Simm (Life on Mars) as Dr. Alec Jeffreys, the Leicester University scientist who first developed DNA profiling techniques. Set in the 1980s, this riveting story centers on Baker’s investigation into the murders of two schoolgirls and his teaming up with Jeffreys to use DNA fingerprinting to find their killer. Code of a Killer premieres in the US on Monday, 27 February 2017, exclusively on Acorn TV. (Photo by Nick Briggs, courtesy of Acorn TV) 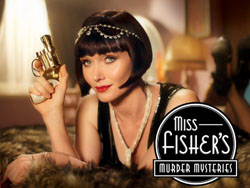 Check your local listings or contact the public TV station that serves your area for info about British, Australian, etc. series making their local broadcast premieres in the US this month. Viewers in Southern and Central California can catch the hit Australian whodunit series Miss Fisher’s Murder Mysteries on KCET (details here), while those in the Washington, DC metro can tune into Series 2 of the BBC daytime drama The Coroner, spy thriller The Secret Agent, Australian crime drama serial Deep Water, and mystery-dramedy Agatha Raisin on WETA. 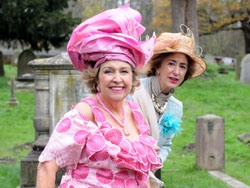 The “Ladies of Letters” books were first adapted into the iconic BBC Radio 4 comedy program and then this TV series starring Maureen Lipman (Plebs) and Anne Reid (Last Tango in Halifax) as widowed pen pals Irene and Vera, respectively, who do their best to one-up each other via the stories in their letters. Ladies of Letters: Series 2 begins streaming Monday, 6 February 2017, on Acorn TV. (Photo courtesy of Acorn TV)

Based on the novel by Francis Iles (pen name of Anthony Berkeley Cox) and set in 1920s Devonshire, this miniseries stars Ben Miller (I Want by Wife Back) as Dr. Edmund Bickleigh, whose prescription for an unhappy marriage to wife Julia (Barbara Flynn, Cranford) involves his extensive knowledge of poisons. Costarring Peter Vaughan (Game of Thrones) and Richard Armitage (Berlin Station), Malice Aforethought begins streaming Monday, 13 February 2017, on Acorn TV. 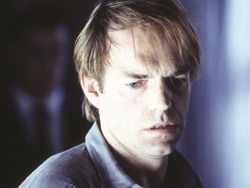 Hugo Weaving (The Matrix), Tony Martin (Serangoon Road), and Aaron Jeffery (Wentworth) star in this multiple-award-winning drama, which follows a man who is seized from his apartment and questioned by two men claiming to be police. As the questioning continues, it becomes clear there is more to this interview than meets the eye. The Interview begins streaming Monday, 20 February 2017, on Acorn TV. 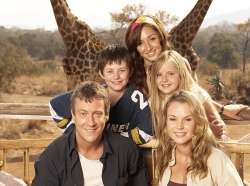 A newly-blended family finds common ground in the African bush when veterinary surgeon Danny Trevanion (Stephen Tompkinson, DCI Banks), his second wife, and their children relocate from England to South Africa, where they attempt to rehabilitate a game reserve for wild animals and establish a veterinary surgery and animal hospital. Wild at Heart: Series 1-8 begins streaming Monday, 20 February 2017, on Acorn TV.

Adapted from Hannie Rayson’s award-winning play, this film explores the delicate undercurrent of memories and secrets during the reunion of three sisters, who converge at their family home in the sleepy Australian seaside town for their father’s funeral. Hotel Sorrento begins streaming Monday, 27 February 2017, on Acorn TV. 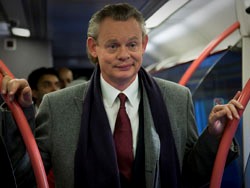 Based on the classic ’70s Britcom The Fall and Rise of Reginald Perrin (which was adapted from the “Reginald Perrin” novels by David Nobbs), this modern update stars Martin Clunes (Doc Martin) as the eponymous business executive, who deals with a litany of daily frustrations, an inattentive wife, and his midlife crisis by engaging in flights of fancy. Costarring Fay Ripley (Cold Feet) and Lucy Liemann (Agatha Raisin), Reggie Perrin: Series 1-2 begins streaming Monday, 27 February 2017, on Acorn TV.

(All images in this section courtesy of Acorn TV) 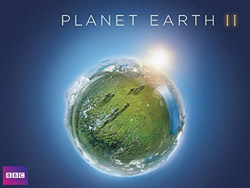 Folks who have cut the cord and are cable free don’t have to miss out on watching this incredible nature documentary. Amazon Video begins streaming each episode of Planet Earth II the day after its first-run telecast, starting Sunday, 19 February 2017. If you prefer to binge-watch the series after all the episodes have aired and/or to save a few bucks off the total price for the six episodes, then get the TV Season Pass. Either way, this is a can’t-miss program for nature program fans. 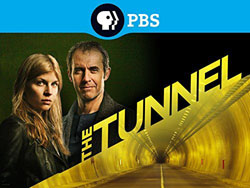 This remake of the hit Swedish-Danish crime thriller The Bridge stars Stephen Dillane (Game of Thrones) and Clémence Poésy (Birdsong) as Karl Roebuck and Elise Wasserman, British and French detectives, respectively, who are brought together on a case involving a corpse found dead center in the Channel Tunnel. If only it ended with just one body. The Tunnel: Series 1 begins streaming as an Amazon Prime Video offering on Tuesday, 21 February 2017.

(All images in this section courtesy of Amazon) 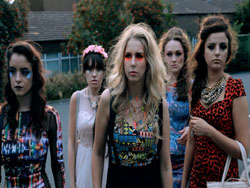 More akin to Geordie Shore than Hebburn, this film follows a group of friends (some frenemies) during one Saturday in the northeastern English city of Newcastle — from their trash-talking and bitch-slapping, to getting dolled up for and being shaken up at that night’s party. It’s riveting stuff, this. LinkTV airs an encore presentation of Drunken Butterflies on Saturday, 25 February 2017, at 9 PM ET/PT. I’ll post my review and interview with Gary Sykes, the film’s writer and director, in advance. (Photo courtesy of LinkTV)

British TV to Watch in Feb 2017: The Collection, Humans, The Missing, and More
Tagged on: Birds of a Feather    Code of a Killer    Crownies    David Brent: Life on the Road    Drunken Butterflies    Humans    Planet Earth II    Spy in the Wild    The Collection    The Missing    The Only Way is Essex