The British “invasion” of American television has become an entrenched and still-growing part of the stateside viewing landscape, but another invasion is also taking audiences by storm, and this time it’s Australian. 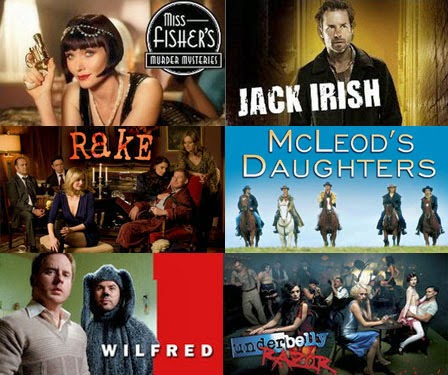 Television programs from across the pond have been enthralling American viewers since the ’70s, when, little by little, PBS member stations began airing Masterpiece Theatre selections such as I, Claudius and Poldark along with syndicated programs such as Doctor Who and Monty Python’s Flying Circus. (BBC America didn’t arrive on the scene until 1998.)

But the story with shows from Down Under is different. In the few years that comprise the 2010s, the US has seen a barrage of Aussie programs make a big splash with viewers, courtesy of video-on-demand (VoD) services and select public television stations and cable channels.

The most popular of these shows has got to be Miss Fisher’s Murder Mysteries,

whose first two series premiered in North America exclusively on Acorn TV. Adapted from the novels by Kerry Greenwood,

the mystery series with the fabulous costumes centers on the sleuthing adventures of the glamorous, gold pistol-carrying and men-attracting aristocrat detective, the Honourable Phryne Fisher (Essie Davis, Cloudstreet) in 1920s Melbourne.

Another of Acorn TV’s exclusive Australian premieres is Jack Irish,

the gritty crime drama based on the Peter Temple novels

that stars Emmy® winner Guy Pearce (Mildred Pierce) as the titular criminal lawyer turned private eye and debt collector. And the latest Acorn TV selection from Down Under is the lighthearted mystery series Mr. & Mrs. Murder,

in which crime scene cleaners Charlie and Nicola Buchanan (Shaun Micallef and Kat Stewart) discover clues that the police missed and become crime solvers themselves.

How have Acorn TV subscribers responded to the subscription VoD’s Australian and other non-British offerings? According to Jen Linck, Vice-President of Acorn TV, RLJ Entertainment Inc.:

“They LOVE them! Miss Fisher’s Murder Mysteries and Jack Irish are two of our most popular shows. And the premiere of Mr. & Mrs. Murder went over really well. We get emails every day asking for more of those shows and more from Australia in general – as well as asking for shows from other countries. We recently premiered a French version of Agatha Christie stories, Les Petits Meurtres D’Agatha Christie, and it definitely exceeded expectations. The excellent feedback about these shows has helped us expand our programming opportunities.”

Other shows from Down Under are making names for themselves in the US, too, and not just in their original forms. If you’ve watched the Fox dramedy Rake, starring Greg Kinnear, or the FX comedy Wilfred, starring Elijah Wood, then you’ve seen the American remakes of the hit Australian programs of the same names. (As with many a Brit program and now Nordic Noir ones, too, it’s likely that more remakes of Aussie series will be coming.)

What is it that makes the hits among Australian shows as compelling as their American, British, and Scandinavian, Italian, and French counterparts? (Heck, make that shows of any nationality.) Linck added here that it’s due to “quality writing, acting, and production.” For audiences outside of “Oz,” there’s also the exotic nature of the Aussie accent and locales. Not every viewer gets to travel to a country that’s half a world away, so “armchair visits” to Sydney, Melbourne, and Perth via Aussie dramas, comedies, reality and other programs are the next best way to experience it.

So, in addition to Acorn TV, where else can you find Australian programs in the US? Most of the other VoD, SVoD, and download services — including Amazon Instant Video,

and even HBO Go — screen at least one series, with Hulu/Hulu Plus currently having the most titles.

Select local PBS stations, which have been airing Miss Fisher’s Murder Mysteries, will also be adding more shows from Down Under to their schedules in the coming weeks and months, so stay tuned.

In the meantime, here is a list of nearly 40 programs from Australia and where you can watch them.

UPDATES as of January 2015: An asterisk below denotes an additional VoD service for the program. A double asterisk denotes a change from VoD to DVD avail at Netflix.

(Also see this post for more TV titles from Australian and New Zealand.)