There are 50 days until the Season 2 premiere of Ricky Gervais’ award-winning mockumentary comedy-drama, Derek,

and I, for one, cannot wait for it to land in my Netflix account.

Derek launches exclusively on Netflix on Friday, 30 May 2014, at 12:01 AM PT — not just in the US but in every territory where Netflix is available — except in the UK, where it debuts on Wednesday, 23 April 2014, on Channel 4, which commissioned the series.

On Netflix, all six 30-minute episodes will be available at launch. 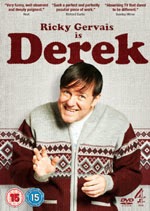 Starring as the titular Derek is Emmy® and Golden Globe winner Ricky Gervais, who is also the series’ creator, writer, director, and executive producer.

Of Gervais, Netflix Chief Content Officer Ted Sarandos said: “Ricky is a terrific partner and he has created a heartfelt character, in Derek, that Netflix members have fallen in love with. His attention to detail and relentless vision to change conventional storytelling on television is perfectly aligned with what we are trying to do with our original series.”

Heartfelt, indeed. Derek is innocent, gentle and goodhearted, loves all animals (except spiders), and embodies kindness. Not sometimes, but all the time. As Derek said, “Kindness is magic.” And therein lies the magic of Derek. It’s moving and touching, but not sappy, and it’s funny. (Seriously!)

When Season 2 opens, it’s a year later at the Broad Hill Retirement Home. Derek and his grumpy best mate Dougie (Karl Pilkington, An Idiot Abroad) are still working there. Hannah (Kerry Godliman, Home Time), Derek’s close friend and protector, is still managing the care home and putting others’ lives before hers. Vicky (Holli Dempsey, Breathless), who did mandated community service at Broad Hill, is now working there full time. And still drinking and hanging about the place is the lecherous ne’er-do-well Kev (David Earl, Cemetery Junction).

Amongst the new faces at Broad Hill are Anthony (Tony Rohr, George Gently), who reunited with Derek, his son, and becomes a new resident, and Cliff (Joe Wilkinson, Him & Her), who looks to be as much of a masher as his brother Kev.

See them all (and Ivor the dog, too) in the trailer below. (Viewer discretion is advised.)

(An FYI for viewers unfamiliar with the term “TOWIE” used by Derek: It refers to the scripted reality series/soap opera, The Only Way Is Essex.)

Commenting on Derek, Gervais said: “I was blown away by the affection from around the world for the first series, particularly the emotional connection it seemed to make with people. I hope they like the second offering as much.”

(If it’s anywhere near as good as the first, I think we will.)

For more insight into Derek the character and Derek the series, check out this clip of the interview Gervais did with Charlie Rose for the Season 1 launch last year.

When the first season debuted on Netflix, I binge-watched all seven episodes in one sitting (for those of you counting, that’s 2.7 hours) — something I rarely do, and only when a show has utterly captivated me. Derek did. Needless to say, Derek was one of my favorite British TV shows of 2013.

I intend to stay up quite late to watch at least the first episode of Season 2 when it launches at 3 AM on the East Coast. Whether I’ll be able to stay awake until 6 AM to binge-watch the entire season remains to be seen. If not, there’s always the next day, conveniently a Saturday.

Derek is produced by Derek Productions Ltd. for Netflix.