Eighteen new and returning series and specials come to US telly in July, including coverage from two UK flower shows and the final season of a much-loved comedy. 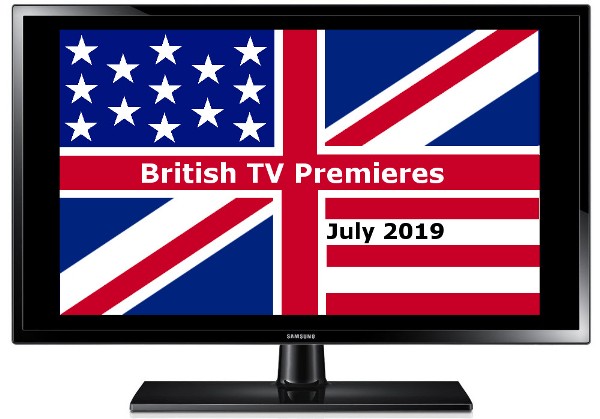 Schedules are subject to change without prior notice.

There’s something for every horticulture lover at the RHS Hampton Court Flower Show! At the center of this year’s festival are a new garden category, a host of demonstrations, marquees bursting with plants, and a focus on health and well-being. The RHS Hampton Court Flower Show premieres in North America as a “Now” title starting Tuesday, July 2, exclusively on BritBox. (Video is from 2018)

This docudrama series combines commentary and reconstructions to tell the story of the fall of the Romanov dynasty. When social upheaval sweeps across Russia in the early 20th century, Czar Nicholas II resists change, sparking a revolution that ends both the dynasty and the lives of the czar and his family. The Last Czars, a Netflix Original series, premieres in the US on Wednesday, July 3, exclusively on Netflix. (You can add it to your queue now.)

Camille Sullivan (Unspeakable) and Aden Young (Rectify) star in this drama as Helen and Luke Sullivan, a devastated couple who become consumed by the investigation into the unexplained and sudden disappearance of their son during a treasure hunt on the day of his tenth birthday. Costarring Peter Coyote (The Spoils Before Dying) and Joanne Kelly (Warehouse 13), The Disappearance premieres in the US on Tuesday, July 9, at 10 PM ET, on WGN America.

The Heist at Hatton Garden (UK)

This limited series depicts the true story of the audacious burglary executed by an elderly gang of career criminals in London’s diamond district. It sheds light on how they planned the raid, the growing tensions within the crew, and the complex police operation that led to their capture. Starring Kenneth Cranham (The White Princess), David Hayman (Trial & Retribution), Alex Norton (Taggart), and Timothy Spall (The Enfield Haunting), The Heist at Hatton Garden premieres in the US on Tuesday, July 9, exclusively on BritBox.

Set a year after the events of Season 2, the new season of this period drama finds brothel owner Margaret Wells (Samantha Morton, The Last Panthers) has been sent to America in chains while her rival, Lydia Quigley (Lesley Manville, Mum), has been sent to Bedlam. Meanwhile, Margaret’s daughter Charlotte (Jessica Brown-Findlay, Downton Abbey) learns that running a lucrative brothel brings enemies as well as friends, including new pimp in town Isaac Pincher (Alfie Allen, Game of Thrones). Harlots: Season 3, a Hulu Original series, premieres in the US on Wednesday, July 10, exclusively on Hulu. 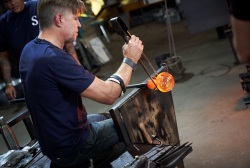 This new competition series features ten master artists who turn up the heat in glassblowing sculpture challenges for the chance to win $60,000 in prizes and the title of champion. Blown Away, a Netflix Original series, premieres in the US on Friday, July 12, exclusively on Netflix. (You can add it to your queue now.) (Photo © David Leyes, courtesy of Netflix)

The new season of this thriller, set a year after the events in Season 1, finds Holly (Synnove Karlsen, Medici) in her second year at uni, sharing a house with Louise (Sophia Brown, Marcella) and other students, and becoming immersed in a campus-wide scandal. Meanwhile, Rachel (Rachel Hurd-Wood, Home Fires) continues to obsess over Holly. Clique: Season 2 premieres in the US on Saturday, July 13, on Hulu.

Based on the “Grantchester” stories by James Runcie, the new season of this hit series opens in 1956, months after the events in Season 3. A troubled Sidney (James Norton, McMafia) leaves the village, and replacing him as both vicar and Geordie’s (Robson Green, Wire in the Blood) crime-solving partner is Will Davenport (Tom Brittney, The Five), a motorcycle-riding, future-embracing man of the cloth. Grantchester: Season 4 premieres in the US on Sunday, July 14, at 9 PM ET, on PBS. (Check your local listings)

The new season of this hit motoring series features former professional cricketer Freddie Flintoff and comedian Paddy McGuinness doing presenting duties alongside returning host Chris Harris. In the season opener, they are tasked with buying a fine example of their own first car, and then driving their purchases to the Danakil Depression — the hottest place on Earth year-round. Top Gear: Season 27 premieres in the US on Sunday, July 14, at 8 PM ET, on BBC America.

Following Series 1‘s cliffhanger, Series 2 of this mystery-crime drama finds the murder squad delving into the discovery of skeletal remains in a garden, the brutal murder of a pub landlord, the death of a teenage au pair, and the double-shooting of a father and son. DS Cole (Sharon Small, Mistresses) and the junior detectives also look into DI Bradford’s (Hugo Speer, The Musketeers) lies and possible involvement in his wife’s disappearance. London Kills: Series 2, an Acorn TV Original series, premieres in the US on Monday, July 15, exclusively on Acorn TV. (Video is from Season 1)

Viewers can see show-stopping plant designs, unique gardens, innovative exhibits, and more at this year’s show, which features the dazzling display of more than 5,000 dahlias! The RHS Tatton Park Flower Show premieres in North America as a “Now” title on Thursday & Saturday, July 18 & 20, exclusively on BritBox. (Video is from 2018)

Following the events in Season 4, the final season of this sci-fi adventure series finds the memories of Dutch (Hannah John-Kamen, The Tunnel), Johnny (Aaron Ashmore, Warehouse 13), and D’avin (Luke Macfarlane, Brothers & Sisters) aren’t their own, as they’ve been replaced with The Lady’s warped version of reality. Killjoys: Season 5 premieres in the US on Friday, July 19, at 10 PM ET, on Syfy.

Wonders of the Moon (UK)

This documentary explores a stunning lunar delights from across the globe, including the South Pacific, where the coral reefs breed in synch with the moon cycles; Hong Kong, where the city falls under the moon’s spell during the mid-Autumn festival; and the United States, where the total eclipse transforms day to night across the country. Wonders of the Moon premieres in the US on Friday, July 19, at 10 PM ET, on BBC America.

In the final season of this BAFTA-winning comedy, Cathy (Lesley Manville, River) joins her family on an English countryside escape to celebrate her brother’s birthday, eventually leading her to make one final step towards her future. Each episode observes a different day of the week, from the family’s arrival on Monday, to the party on the Saturday. Costarring Peter Mullan (Ozark), Mum: Season 3, a BritBox Original series, premieres in the US on Thursday, July 25, exclusively on BritBox. (Video is from Season 2)

Created by and starring Noel Clarke (Doctor Who) and Ashley Walters (Top Boy), this buddy cop drama follows detectives and best friends Aaron Bishop (Clarke) and Ronnie Pike Jr. (Walters), who investigate traffickers, drug dealers, armed robbers, and others of the UK’s most dangerous criminals. Costarring Lindsey Coulson (EastEnders), Bulletproof: Season 1 premieres in the US on Sunday, July 28, at 8 PM ET, on The CW.

This landmark documentary series follows police detectives around the clock, and the pressure is on during their investigations as they have just 24 hours to hold a suspect. Viewers get unprecedented access into a major investigation that leads detectives to take down one of their own. 24 Hours in Police Custody: Seasons 6-7 premieres in North America on Tuesday, July 30, exclusively on BritBox. (Video is from Season 5)

OTHER NATIONAL PREMIERES TO CONSIDER

Based on characters in the DC Comics universe, this new action-crime drama series stars Jack Bannon (Endeavour) as famed butler Alfred Pennyworth, a former British SAS soldier who sets up a security company and goes to work for Thomas Wayne (Ben Aldridge, Our Girl), Bruce Wayne’s father, in 1960s London. Featuring a mostly (completely?) British cast, Pennyworth premieres in the US on Sunday, July 28, at 9 PM ET, on Epix.

Titles in this section begin streaming on the dates shown below on Acorn TV and the Acorn TV channel on Amazon.

The Mayor of Casterbridge (UK-US)

Based on Thomas Hardy‘s novel, this TV movie stars Ciarán Hinds (The Terror) as Michael Henchard, who in a drunken fit auctions off his wife and baby for five guineas. Eighteen years later, he is the Mayor of Casterbridge, and his wife (Juliet Aubrey, Snatch) and daughter (Jodhi May, Gentleman Jack) unexpectedly return. The Mayor of Casterbridge begins streaming Monday, July 1. 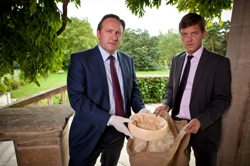 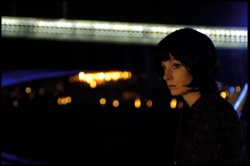 In this four-part documentary that will finish airing on the UK’s Channel 5 in a few days, historian Bettany Hughes takes viewers on a tour through the history and highlights of Ancient Egypt. Travelling on her own traditional Dahabiya boat, Bettany stops off at iconic sites along her nearly 1,000-mile journey on the River Nile, and offers up intriguing bits like ancient gossip on the sex lives of the rich and famous and a close-up encounter with King Tut’s grandmother. The Nile begins streaming Monday, July 29.

Titles in this section begin streaming on the dates shown below on BritBox and the BritBox channel on Amazon. 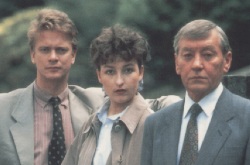 Four more early seasons of this long-running, action-packed, and hard-hitting Scottish police procedural-crime drama series arrive in the US in July. They star Mark McManus as DCI Jim Taggart, the quiet anti-hero who investigates gruesome murders against the bleak backdrop of of Glasgow. Taggart: Seasons 5-8 begins streaming Monday, July 1. (Photo courtesy of BritBox)

For years die-hard Whovians debated whether the Peter Cushing movie adaptations of Doctor Who are canon within the Whoniverse. As of 2018, the answer is decidedly yes! The Doctor Who Double Feature begins streaming Tuesday, July 16.

Daleks’ Invasion Earth 2150 A.D. — The Daleks’ fiendish plot against Earth and its people in 2150 is foiled when the Doctor and his friends arrive from the 20th century and figure it out.

Doctor Who and the Daleks — An eccentric inventor and his companions travel in his TARDIS to the Planet Skaro and battle the evil menace of the Daleks.

Titles in this section begin streaming on the dates shown below on Netflix.

Following its addition of series like To Build or Not to Build and The World’s Most Extraordinary Homes, Netflix brings another factual series of the British home and garden variety to viewers in America: Grand Designs, which features unusual, often elaborate home-building projects. Presented by designer Kevin McCloud since the show’s inception, Seasons 10 and 15 include projects in the Cotswolds, Midlothian, Scotland, and various suburban locations. Grand Designs: Season 10 & Season 15 begins streaming Wednesday, July 10. (Video is from Season 1)

Based on the comic book series by Beau Smith, the third season of this supernatural Western horror series opens with sexy European vampires venturing into and causing mischief and murder in Purgatory, the hometown of legendary lawman Wyatt Earp’s great-great-granddaughter, Wynonna Earp (Melanie Scrofano, Bad Blood). Later she pays an unexpected visit to her psych patient mama (Megan Follows, Reign), and her run-in with the Revenants leads Wynonna to an unexpected revelation about the Earp Curse. Wynonna Earp: Season 3 begins streaming Tuesday, July 16.

For details about the July premieres of shows from Australia and New Zealand, visit The Down Under TV Place. For those about the debuts of original-language, English-subtitled programs from Europe, visit The Euro TV Place.