It’s rare that two seasons of a show will premiere in the same year, yet that is what The Brokenwood Mysteries will do when its second series debuts in the US next week.

Back in May I wrote that Series 1 of The Brokenwood Mysteries is “one of those shows you love to love.” Stateside subscribers to Acorn TV took to the new show from New Zealand the same way they have for nearly two decades to the program it’s been likened to: the perpetual British favorite Midsomer Murders.

Now with the second series of Brokenwood set to debut in the States, the question that arises is whether it is as good as the first series or the victim of the sophomore slump.

Well, I am thrilled to say it is the former.

Similar to Midsomer, both series of The Brokenwood Mysteries have a comfy, down-home feel and appeal, and for the most part are cozy, too, given the small-town settings and downplay of violence on screen. And like all good whodunits, they feature intriguing stories with recognizable character types and intricately-woven plot strands that keep you guessing until the end.

The immense likability of the lead characters is also something the two shows have in common. In Brokenwood the top cop is Detective Senior Sergeant Mike Shepherd (Neill Ray, Go Girls, Legend of the Seeker), a serial divorcé with a love of country music, a penchant for talking aloud to victims of fatal crimes, and a 1971 white Holden Kingswood as his prized possession. 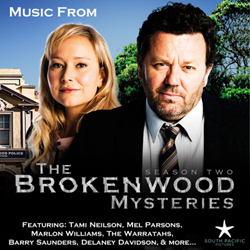 Unlike its British cousin, Brokenwood‘s music comes not from a theremin but off-the-charts good country tunes instead, available on the Series 1 and Series 2 soundtracks. (This, from someone who rarely listened to country music until this show came along.)

For Series 2 of The Brokenwood Mysteries, the writers — Timothy Balme (The Blue Rose), Greg McGee (Street Legal), and Nick Ward (The Knock) — have crafted four new murder mysteries set in and around the rural New Zealand town of Brokenwood, where crimes are as dark and twisted as the ones in quaint Midsomer.

“Leather and Lace” revolves around the murder of the Brokenwood rugby team’s coach, a man loved by nearly everyone (culprit excluded) but not necessarily respected, owing to the embarrassing losing streak. A clue left by the killer in the frightful display of the victim’s corpse leads Mike and Kristin in one direction, while grudges held by some of the players point them in another. Complicating the investigation is the discovery of a young woman’s dead body in the woods.

“Something’s rotten in the state of Brokenwood” in “To Die or Not to Die,” when a local production of Hamlet, with Jared Morehu (Pana Hema Taylor, Spartacus: War of the Damned) playing the Prince of Denmark, concludes with the death of a cast member during the curtain call. It looks like chronic disease was the cause, until Shepherd gets a whiff of foul play. As Sims teaches him a thing or two about Shakespeare, they begin untangling webs of intrigue between the egoistic thespians, and Sam encounters an eccentric old woman in the mountains who has ties to the case. 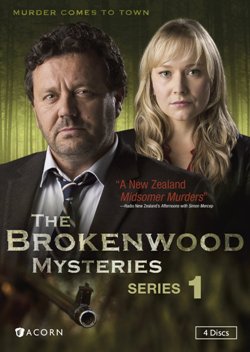 A severed hand in a crayfish pot, found floating near Brokenwood Beach by Jared, is the “Catch of the Day.” The number on the pot is the sign of the devil, and the finger is pointing at someone, but who? And whose hand is it, anyway? Fishing is big business here, and suspects abound, including the Keely family, a rival fishing company, the victim’s widow and her lover, and the ultra-religious volunteer fisheries officer. The investigative waters of the murder get even muddier when questions about an accident from five years ago resurface.

And in “Blood Pink” a hotel cleaner finds the body of Holly Collins, Shepherd’s favorite country music singer, dead from electrocution the morning after her final concert with the Hole in the Wall Gang. Scrawled in lipstick is what appears to be a suicide note. Oddly, Holly’s tour manager and band mates are all MIA, then as they’re found and interrogated, Mike, Kristin, and Sam learn of the grudges that could be motives for murder. Meanwhile, the child of the band’s fiddle player has gone missing.

In addition to the reasons noted above, another characteristic of Brokenwood that has it on my list of favorite new shows this year is its blend of noir and whimsy. (When was the last time you heard those two words in the same sentence?) Neither quality is full-on but apparent nonetheless. And when combined with the well-crafted storylines and characters, cool country tunes, and fine acting, the sum total makes Brokenwood a can’t-miss mystery drama — one for which I now have my fingers crossed for a third series.

The Brokenwood Mysteries: Series 2 premieres in the US beginning 7 December 2015, on Acorn TV. A new episode will be added every Monday through 28 December.