It’s a sad day in Brit TV land, as ITV has announced that the current series of Lewis, known as Inspector Lewis in the US, is the last.

Kevin Whately and Laurence Fox are retiring from Inspector Lewis.

If it weren’t for the early hour of the day (and my allergy to alcohol), I’d be sobbing in a pub with a pint of bitter right now. No more Lewis and Hathaway??? I’m gutted. (I’m guessing you are, too, right?)

What is now confirmed to be the last-ever series of Inspector Lewis is currently airing on ITV. By the time all is said and done, Whately and Fox will have played one of the most popular crime-fighting, mystery-solving detective duos on telly — as the former DI and now consulting detective Robbie Lewis and DI James Hathaway, respectively — in 33 (UK) episodes over the course of a decade. (There will be fewer in total in the US, as the series airs as feature-length episodes, rather than as two-part stories.)

The number thirty-three is a nod to Inspector Morse, which gave us the spin-off of Inspector Lewis. Whately had costarred as Lewis with the late John Thaw as Morse in that much-loved series, and their final episode together was also the thirty-third one. 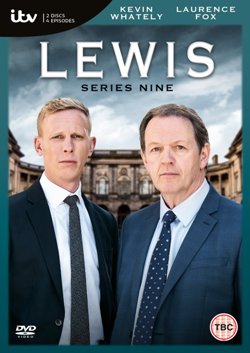 Said Whately about bringing Inspector Lewis to a close:

“I feel incredibly fortunate to have shared a decade of fantastic worldwide success with Laurence and with the most brilliant crew, cast and production team anyone could wish for, and all that time with the loyal support of so many fans and of our backers ITV and WGBH ‎Boston. Thanks everybody. What a ride it has been!”

“What an extraordinary ten years. I feel so lucky to have worked with absolutely the best crew in the business on Lewis. I will really miss hanging out with Kev for half the year. I am however fairly confident that he will not miss my flawless Geordie accent between takes. Thank you so much for watching and supporting us. “

The final Inspector Lewis series consists of three stories: “One for Sorrow,” “Magnum Opus,” and “What Lies Tangled.” The finale airs as a two-parter on ITV on the 3rd and 10th of November 2015.

In “One for Sorrow” DI Hathaway and DS Lizzie Maddox (Angela Griffin) have a new boss, Chief Superintendent Joe Moody (Steve Toussaint, Scott & Bailey), who replaced CS Jean Innocent (Rebecca Front) after she left to work for the Suffolk Constabulary. Lewis is still with the Oxford Police as a consulting detective, but Moody questions whether he should stay on. Meanwhile, the trio have to determine the identity of a corpse discovered in a well, as Hathaway struggles to deal with his father’s failing health.

“Magnum Opus” finds Lewis, Hathaway, and Maddox investigating a series of murders somehow related to alchemy, Robbie and lady-love Laura Hobson (Clare Holman) are planning a six-month getaway to New Zealand, and James tries to learn more about his father as the latter’s dementia progresses.

And in “What Lies Tangled,” an eminent mathematician is killed in a parcel bomb explosion, and Robbie is in a race to find the killer, because of both his impending trip with Laura and his need to impress Moody so as to have his contract extended when he returns.

The final series of Inspector Lewis is expected to premiere in the US on PBS Masterpiece Mystery in 2016.