Heads up, stateside Foyle’s War fans. The final series/season of the hit mystery/crime drama is soon to make its US broadcast debut on public TV stations across the country.

is no more, given the announcement in January that the ninth series, which debuted in the US on Acorn TV in February, would be the last. The good news is, for fans of this ever-popular Brit mystery series, the final season is set to air on public TV stations in as little as ten days from now. 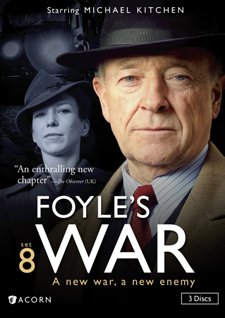 Starring BAFTA nominee Michael Kitchen as MI-5 Senior Intelligence Officer Christopher Foyle, and NTA nominee Honeysuckle Weeks as his assistant Sam Wainwright, Foyle’s War‘s last three episodes — each inspired by real events — explore the world of the American and German businesses that were accused of fueling Hitler’s War Machine, the tangled history of the creation of the state of Israel in British Palestine, and a shocking scandal within the Special Operations Executive (SOE).

And in “Elise,” an assassination attempt on Hilda Pierce (Ellie Haddington) compels Foyle to examine her SOE activities during the war and rumors of a traitor.

will air on the stations listed below beginning 1 May 2015. As always, transmission details vary by market, so check your local listings or contact the station that serves your area for broadcast dates and times.