February kicks off with new episodes of Downton Abbey and Grantchester, not to mention the annual multi-million-dollar advert fest of US pro football’s championship game. Here’s what Brit TV fans can look forward to the rest of the month. 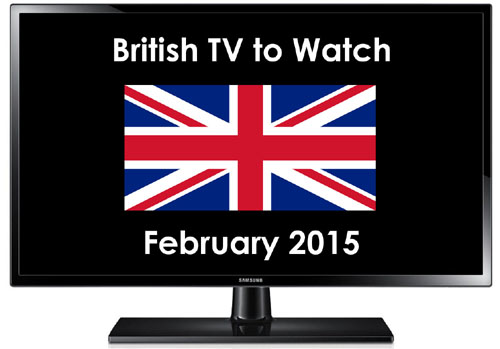 February is Acorn TV month, because, save for the Game of Thrones behind-the-scenes special, all Brit TV debuts are exclusives on the subscription VoD service. And most of them begin streaming on Monday, the 2nd of February.

starring Michael Kitchen and Honeysuckle Weeks, and guest starring John Mahoney. Go here to get the lowdown on why the series is ending now.

is a must-watch. Narrated by Olivia Colman (Broadchurch), it takes viewers into the minds and hearts of British men and women who captured their thoughts and feelings in letters, diaries, and memoirs written between 1914 and 1918, the period of The Great War. Actual footage and recreations of war-time settings are intercut with scenes of actors giving life to the original words, from soldiers detailing the horrors of life in the trenches, to civilians expressing their hopes while waiting for their loved ones to return home.

Their personal stories are deeply touching, and the cast is incredible. Portraying men on the front lines of battle in France and Belgium, and women in homes across Britain, are Daniel Mays (Mrs. Biggs), Matthew McNulty (The Paradise), Myanna Buring (Ripper Street), Romola Garai (The Hour), James Norton (Grantchester), Claire Foy (Wolf Hall), Amy Morgan (Mr. Selfridge), Henry Lloyd-Hughes (Madame Bovary), Nathan Stewart-Jarrett (Misfits), Gerard Kearns (Shameless), and Alison Steadman (The Syndicate), amongst others. This one is not to be missed. Really.

The Mystery of Lord Lucan

is a three-parter that consists of Lucan, an intense true-crime story about a high-society murder, and The Trial of Lord Lucan.

Based on John Pearson’s book, The Gamblers,

the two-part Lucan centers on the events that lead up to the disappearance of Lord Lucan (Rory Kinnear, Penny Dreadful). An inveterate gambler with a dark nature and corrupt friends, including ruthless Clermont Club owner John Aspinall (Christopher Eccleston, Fortitude), Lucan is the prime suspect in the murder of Sandra Rivett, his children’s nanny, after she is found bludgeoned to death on 7 November 1974. He goes on the lam to escape prosecution and is never seen again. While many have speculated about Lucan’s fate, the truth is still a mystery, one that has gone unsolved for more than 40 years.

The third part, The Trial of Lord Lucan, is a TV movie that reimagines Lucan’s day in court. It stars Lynsey Baxter (The French Lieutenant’s Woman), Anthony Head (You, Me & Them), and Julian Wadham (The Iron Lady).

Other exclusives bowing on 2 February 2015 are new episodes of the hit documentary series, Time Team,

And for those who cannot wait to see Jamie Dornan (The Fall) as Christian Grey in Fifty Shades of Grey, there’s the four-part historical drama, New Worlds.

Set in the 1680s, the story follows four people — Abe (Dornan), Beth (Freya Mavor, The White Queen), Hope (Alice Englert, Jonathan Strange & Mr. Norrell), and Ned (Joe Dempsie, Game of Thrones) — as they struggle against the tyranny of King Charles II (Jeremy Northam, The Tudors) for the freedoms they had fought so hard to win in both England and America.

A new episode of New Worlds premieres every Monday, exclusively on Acorn TV, starting on the 16th of February.

Enjoy the February programs, and stay tuned for the shows debuting in March.