Several of the British TV imports that arrived stateside last year have been huge hits with audiences and ratings winners for the local stations that have been airing them. And more stations have come on board. 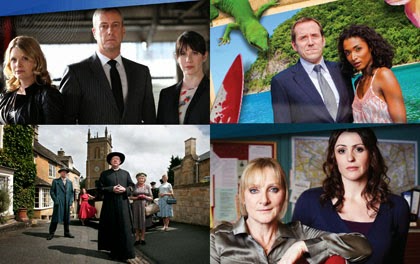 In many of the markets where DCI Banks,

have been airing, viewers have been tuning in by the hundred of thousands.

According to Kevin Harris, Television Station Manager at PBS member station WETA (and its sister channel, the 24/7 British TV WETA UK) in Washington, DC, viewership figures and ratings for these four programs have been nearly double those of shows that had aired in the same time slots.

Series 3 of both the gripping crime drama DCI Banks and humorous mystery Death in Paradise, as well as Series 2 of the charming mystery Father Brown, will be airing soon on local PBS member stations and independent public television stations, and the links below will take you to the posts that have updated information about the ones that will be airing the new seasons in addition to the earlier one(s).

Production on the fourth series of Scott & Bailey starts this Spring, so it will be a while before anyone gets to see it. In the meantime, though, more stations have added this ever-so-clever police procedural to their programming line-ups, and you can find the complete list of them here:

Stay tuned, because more “new to the US” British TV programs will be airing in the States exclusively on local public television stations, and we’ll have program details and station lists for them in the coming weeks.