In “What to Watch When Felled by the Flu,” I mentioned the hit BBC One program Death in Paradise. A number of PBS affiliate stations across the U.S. have been airing it or will be, so if you haven’t seen it yet and enjoy mysteries, I’ve put together a list of the stations where you can watch it. 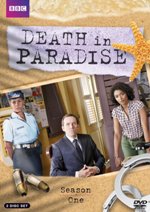 But first, a bit about the program. Death in Paradise

is a crime dramedy starring Ben Miller (Primeval, The Worst Week of My Life) as DI Richard Poole, a detective with the Metropolitan Police who’s been sent from the UK to the (fictional) Caribbean island of Sainte-Marie to investigate the murder of the inspector there. (The series is filmed on Guadeloupe.) Once done, and much to his dismay, he must stay on as the new police chief.

He isn’t out of his depth as far as detective work goes, but he is out of his element in the sun, sand and surf, and thus opts to remain in his suit, tie and dress shoes while he searches for clues to solve cases. Although Poole asks, “Why are the most obvious things the hardest to see,” he eventually does see them, and uses his skills in deduction to get the culprits.

Working with Poole are Officers Dwayne Myers (Danny John-Jules, Red Dwarf) and Fidel Best (Gary Carr, Silent Witness), and DS Camille Bordey (Sara Martins, Maigret, Paris, Je T’Aime), a former undercover detective whose cover was blown during the investigation of the previous inspector’s murder. Her relationship with Poole reminds me of that between Martin and Louisa on Doc Martin. So, too, does the show itself, with its quirkiness and low-key drama and comedic bits. 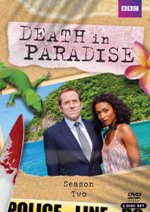 Series One aired on BBC One in 2011 and delivered strong ratings. Series Two is currently airing and ratings have been even higher. A third series was commissioned last month and is expected to will air in 2014.

All in all, Death is Paradise is delightful and well worth a watch. Here’s a clip:

And here’s the list of the PBS stations airing Death in Paradise:

UPDATE: This is the FULL LIST of PBS member stations and independent public television stations airing Series 1 and 2, and the upcoming Series 3, of Death in Paradise. Check your local listings for dates and times.