Hooray! The wait for the final two episodes of Jack Taylor is finally over! 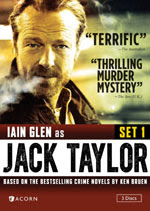 are now available for both streaming and DVD rental, only through Netflix.

In “The Dramatist,” a student falls to her death on the grounds of the college she attended. On the surface (no pun intended), it looks to be a drug-related suicide. But a professor isn’t convinced and hires Jack to investigate. And Jack, no slouch when it comes to Irish mythology and literature, recognizes the line from Irish playwright John Millimgton Synge’s Deirdre of the Sorrows in the suicide note. It’s a clue, but what does it mean?

And in “Priest,” a man of the cloth is beheaded inside a church. Father Malachy (Jack’s mum’s friend), afraid he could be next, enlists Jack’s help. Turns out he knew the murdered priest had abused two boys years ago. Was this retribution for past sins? The plot thickens, and there’s more to it than meets the eye.

You can stream all five Jack Taylor

episodes on Netflix, the first three (“The Guards,” “The Pikemen” and “The Magdalen Martyrs”) on Acorn TV through 11 August, and the first two on Hulu Plus.

For details about these episodes and the show in general, check out Irish Crime Drama “Jack Taylor” Premieres In U.S.

(By the way, if you’re looking to buy the Set 2 DVD, it hasn’t been released in the US yet, but it is part of the Jack Taylor Complete Collection,

which you can get at Amazon UK.)