I don’t know about you, but I think Iain Glen is da bomb. So I am thrilled that, not only has he been gracing our screens in Game of Thrones, his series Jack Taylor

has finally arrived on these shores. 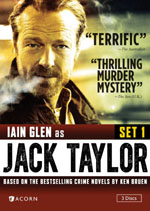 Based on the noir crime novels by Ken Bruen,

is an Irish television series that stars Glen as the titular Taylor, a hard-drinking, heavy-smoking ex-Garda who’s now earning his keep as a private detective in Galway. He takes on cases the Gardaí won’t, and relies on help from newbie Garda Kate Noonan (Nora-Jane Noone) and Taylor-worshipping sidekick Cody Farraher (Killian Scott) to get the job done.

Glen’s scruffy good looks and gravelly voice (and fine acting, of course) are spot on for the role of Taylor, which is dark and gritty like the dramas that unfold over the course of each feature-length episode.

The first three (of the five that have been produced to date) premiered last week in the U.S. They include:

“The Guards” — After a series of apparent suicides that have left four young women dead, a worried mother hires Taylor to find her missing 18-year-old daughter. But something about his new client makes the detective uneasy. While getting to the bottom of the earlier deaths, he discovers that the mother may have an ulterior motive for her search.

“The Pikemen” — Determined to restore law and order, a group of local vigilantes known as the Pikemen is meting out its own brand of rough justice on the streets of Galway. Taylor comes face-to-face with the group during one of his investigations but soon ends up on the wrong side of the law himself.

“The Magdalen Martyrs” — Taylor is hired to look into past abuses at the infamous Magdalen laundries, the city’s home for “wayward girls.” The daughter of a former inmate wants him to track down a woman called “Lucifer,” a particularly brutal nun who worked there.

via streaming at Acorn TV, Netflix, and Hulu Plus.