The Writers Guild of America, East and West (WGAE and WGAW), recently announced the 101 Best Written TV Series of All Time, and ten of the programs are British productions or co-productions. Kudos and congratulations to them and to all that made the list.

The “TV 101” list, as determined by online votes cast by WGAW and WGAE members, is comprised of “classic, trailblazing series and miniseries, as well as current and critically acclaimed programs, from comedies and dramas to variety/talk and children’s programming.”

Any series that were written in English, featured onscreen writing credits, and aired in the U.S. from the early years of television through the present on broadcast TV and basic or pay cable, including animation, children’s, comedy, daytime/serial, drama, scripted anthologies, miniseries with six hours or more of programming, and variety/talk series, were eligible. Individual episodes, specials, non-serialized or individual programs, including telefilms/movies-of-the-week and miniseries with less than six hours of programming, were not eligible.

The top five series are no surprise, as they are all critically-acclaimed audience favorites. The Sopranos, starring the late James Gandolfini, took top honors, followed by Seinfeld, The Twilight Zone, All in the Family, and M*A*S*H. 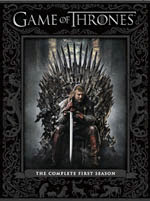 Among the British programs that made the list, the worldwide fantasy sensation Game of Thrones

was close behind at #43, tying with long-running crime drama Law & Order and baby-boomer ensemble drama thirtysomething.

The brilliant The Office (UK)

tied with the wise-cracking The Colbert Report and excellent legal drama The Good Wife at #50.

There was another tie at #58, between the laugh-out-loud Fawlty Towers

The epic historical miniseries I, Claudius

also tied with the sidesplitting cop sitcom Barney Miller at #76.

and masterful (and original) Upstairs, Downstairs

in a double tie with the classic anthology series Alfred Hitchcock Presents and sci-fi hit Star Trek: The Next Generation.

At #90 was the thriller The Prisoner,

a remake of the classic ’60s series.

And rounding out the Brit list was the absolutely hilarious Absolutely Fabulous,

which tied with nearly everyone’s favorite The Muppet Show, at #91.

WGAE President Michael Winship and WGAW President Chris Keyser said this about the “TV 101” list in a joint statement:

“At their core, all of these wonderful series began with the words of the writers who created them and were sustained by the writers who joined their staffs or worked on individual episodes. This list is not only a tribute to great TV, it is a dedication to all writers who devote their hearts and minds to advancing their craft.”

That said, lest you think that ten British television series are a rather meager showing in of a list of 101, especially when brilliantly-crafted programs such as The Hour,

didn’t make the cut, take some solace in this: Another ten featured British actors who not only had key and supporting roles, but who took the words the writers gave them and turned them into list-making gold… and with American accents to boot! They include: