Stateside fans of P.G. Wodehouse, rejoice! The first series of the BBC comedy Blandings has arrived on our shores, courtesy of Acorn TV. 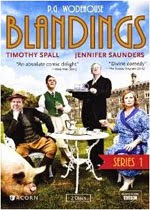 Many Brit TV viewers on this side of the pond were introduced to the works of English humorist P.G. Wodhouse by way of the fabulously droll ITV series Jeeves and Wooster,

which starred Stephen Fry and Hugh Laurie and aired on PBS in the ’90s. The desire to see more of his works on screen went unfulfilled until recently, thanks to the BBC.

which premiered on BBC One in January, was adapted by writer Guy Andrews (Lost in Austen, Chancer) from Wodehouse’s series of Blandings Castle stories.

It stars Timothy Spall (The Street, The Syndicate) as Clarence Threepwood, 9th Earl of Emsworth, lord and resident of Blandings Castle. He’s a pleasant if absent-minded fellow, who prefers tending to his garden and prized pig, the Empress of Blandings, than his familial and lord-of-the-manor responsibilities.

Lord Emsworth’s easygoing nature doesn’t sit well with his fellow castle resident and domineering (and exasperated) sister Connie, a.k.a. Lady Constance Keeble (Jennifer Saunders, Absolutely Fabulous, Jam & Jerusalem/Clatterford), who is constantly bellowing “Clarence!” and going on about his having to sort this or that issue on the estate or see to it that one or another niece or nephew doesn’t marry her or his unsuitable (read: commoner) paramour du jour.

Also residing at Blandings Castle is Lord Emsworths’s son, Freddie, a.k.a. the Honourable Frederick Threepwood (Jack Farthing, Pramface, Silk), a likeable and rather dimwitted ne’er do well with a Tintin-like ‘do, questionable driving skills, and a brand of shenanigans all his own.

And then there’s Beach the butler (Mark Williams, Doctor Who, Harry Potter), whose penchant for a nip of port here and a swig of champagne there (while on duty, no less) leaves him disheveled at times, but seemingly no less capable of performing his duties amid the endless stream of house matters and house guests.

is a delight, and viewers in the UK took to it like Lord Emsworth to the Empress of Blandings. And so the BBC commissioned Series 2, which is set to air in the UK in early 2014. Andrews, who will also script the upcoming series, had this to say:

“As ever, all Clarence wants is to be left in peace with his beloved pig. But events conspire against him as never before. His incorrigibly rakish brother Galahad is on the prowl with a glittering monocle and a case full of shocking memoirs. Other guests and impostors include a voracious Hollywood producer, a dancing saxophonist secretary, a leather-gusseted religious maniac, Clarence’s frankly terrifying sister Charlotte and – worst of all – the poker-wielding Duke of Dunstable, the rudest man in Shropshire. Will tranquillity ever reign at Blandings Castle, even for an afternoon?”

Until then, we have the six episodes of Series 1, which had their U.S. premiere exclusively on Acorn TV’s website and YouTube channel. Here’s a preview: