It’s not often that I’ll put out a reminder about a series premiere, but the new BBC crime drama, The Fall, is no ordinary series. 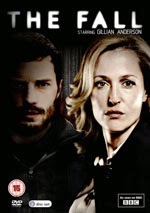 Firstly, even before the series aired, everything pointed to The Fall

being a must-watch program. It’s a psychological thriller and crime drama in one. It stars Gillian Anderson as Stella Gibson, a Detective Superintendent with the Metropolitan Police who’s on the trail of a serial killer in and around Belfast, Northern Ireland. And it lets us know from the off that Paul Spector (Jamie Dornan) is the serial killer. So, we know whodunit. We don’t know if, when, or how Gibson will catch him.

Secondly, when The Fall premiered in the UK, it was the highest drama series launch on BBC Two since Rome

debuted on the channel in 2005. Clearly, viewers loved the first episode. And the brass at the BBC loved that they did, so much so that they have already commissioned a second series of The Fall, for which scripts have been written and principal photography resumes in January 2014 in Belfast.

Said BBC Head of Drama Northern Ireland, Stephen Wright: “I am thrilled with the audience’s response to episode one of The Fall and delighted for Allan Cubitt who created the show. It is a testament to the talent and dedication of the cast and crew in Belfast…”

“In a week that has seen BBC Drama enjoy record success at the BAFTAs, winning 7 out of 8 awards, it’s particularly gratifying to see the audience reaction to the launch of BBC Two’s new original British drama The Fall – an outstandingly imagined piece of series television.”

And Janice Hadlow, Controller, BBC Two, had this to say:

“I’m delighted to see The Fall do so brilliantly – I hope the audience will keep coming back to follow the twists and turns to come.”

Thirdly, The Fall is one of the few series to make its U.S. debut just two weeks — not months or years — after its premiere across the pond.

So, head over to Netflix starting today to catch all five episodes of The Fall.

For more info about the series, check out “‘The Fall’ — New BBC Crime Drama Starring Gillian Anderson to Premiere in U.S. on Netflix.”