The gap between program premiere dates in the UK and U.S. is closing. At least that’s the case for the new crime drama, The Fall, starring Gillian Anderson.

Unlike most programs out of the UK, for which U.S.-based viewers must often wait months if not years to watch (save for those who go the route of VPNs or region-free DVD players), The Fall

will make its stateside debut on 28 May on the Netflix streaming service a mere two weeks after it premieres on 13 May in the UK on BBC Two. Hooray! (At least if you’re a Netflix subscriber.)

And from the sounds of it, Netflix picked up what should be a hit. 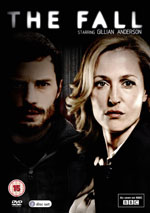 stars Gillian Anderson (Bleak House, The X-Files) as homicide detective DSI Stella Gibson, who’s been seconded from The Met in London to catch a serial killer in Belfast, Northern Ireland. From the off, we know that said serial killer is Paul Spector, played by Jamie Dornan (Once Upon a Time, Shadows in the Sun), so, instead of this being a whodunit, it’s more of a will-they-catch-him-or-won’t-they psychological thriller.

The local police are under pressure to make an arrest in a high-profile, unsolved murder, but they have no suspects. Truth be told, they have no experience with sexually-motivated serial killers. Gibson has, and she’s been brought in to review the investigation. Animosities and hostilities toward her being an outsider aside, she heads up a task force to find this killer hiding in plain sight and bring him to justice.

Throughout the course of the five-part miniseries, we follow both characters — Gibson as she hunts for Spector, and Spector as he hunts for his prey in and around Belfast while living an otherwise seemingly normal life with his wife, children and work. It’s a complex cat-and-mouse game from both sides.

Said Ben Stephenson, Controller, BBC Drama Commissioning: “The Fall is a unique, forensic and characterful take on a classic genre that continues BBC Two’s commitment to original British drama in 2012. Cubitt’s rich and complex psychological thriller combined with another compelling performance from Gillian Anderson will keep viewers on the edge of their seats.”

Sounds great. See you at Netflix on 28 May!