Critically-acclaimed ITV mystery Broadchurch heads to this side of the pond this summer, when it premieres on BBC America as a part of the cable channel’s slate of Dramaville programs. 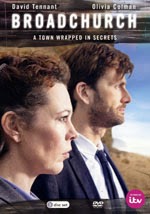 centers on the investigation of a young boy’s murder in the (fictional) British seaside town of Broadchurch.

Leading the investigation are DS Ellie Miller (Olivia Colman, Twenty Twelve, Rev.), a lifelong resident of Broadchurch, and DI Alec Hardy (David Tennant, Doctor Who, Single Father), Ellie’s by-the-book boss from the city who gets the job that had been promised to her.

As they search for clues and the killer, Ellie and Alec try to keep the newspapers from derailing the investigation and prevent the crime from impacting local tourism at the beach where the boy was murdered.

The series had record ratings on telly and broke Twitter records in the UK, and the revelation of the killer in the series finale was one of the most closely-guarded secrets in recent TV history. And while both ITV and Chibnall had intended it to be a one-off series, Broadchurch has been commissioned for a second series, which begins production in 2014.

The eight-episode first series of Broadchurch premieres on Wednesday, 7 August 2013, at 10PM Eastern as part of Dramaville on BBC America.