Frankenstorm is looming large here on the East Coast, and the rain, wind, and plummeting temperatures have arrived in the Mid-Atlantic region, courtesy of Hurricane Sandy and a nor’easter. If you’re in the storm’s path, please stay indoors, stay safe, and stay up to date on evacuation orders and related news in your area. British TV can wait. For those of you who are unaffected by this or other storms in the U.S., here are two premieres and one marathon starting online today. 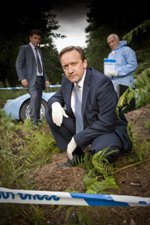 Premiering today on Acorn TV are the episodes that comprise Midsomer Murders: Set 21. “Death in the Slow Lane,” “Dark Secrets,” “Echoes of the Dead,” and “The Oblong Murders” are the first episodes of Season 14, which have Neil Dudgeon in the lead role of DCI John Barnaby.

This Barnaby, the younger cousin of DCI Tom Barnaby (John Nettles), was introduced in last season’s final episode, “Fit for Murder,” when the elder cousin retired. In fitting Midsomer Murders fashion, there are murder cases to be solved soon after DCI John officially takes his post at Causton CID alongside DS Ben Jones (Jason Hughes) and Dr. Bullard (Barry Jackson).

After having watched Nettles’ Barnaby for thirteen seasons, I thought it would be disconcerting to see another actor in the lead role. Now, after having watched “Death in the Slow Lane,” I am pleased to say that I found Dudgeon’s Barnaby to be quite likable and a good fit for the series.

The four episodes of Set 21 are only available for streaming on Acorn TV through December 9. To stream episodes from Seasons 1-13, head over to Netflix or Amazon Instant Video. 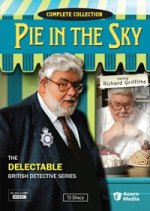 Also on Acorn TV beginning today is the Pie in the Sky marathon. This is one of my all-time favorite mystery series, and I’m glad that it’s being streamed online for folks who haven’t had the pleasure of seeing it before and for those who’ve seen it, love it, miss it, and don’t yet have the DVD collection. (It’s a keeper.)

In a nutshell, Richard Griffiths (Harry Potter’s Uncle Vernon) plays Henry Crabbe, a Detective Inspector who’d rather take early retirement and cook than solve any more cases. He’s already on a leave of absence, due to an investigation regarding his being shot in the line of duty, but going off the force completely is out of the question as far as his superior officer, Assistant Chief Constable Freddy Fisher (Malcolm Sinclair), is concerned.

Despite this setback, Crabbe and his wife Margaret (Maggie Steed) open a restaurant, Pie in the Sky, where Crabbe cooks up traditional English dishes, of which steak and kidney pie is his signature dish. But all is not peaches and cream, as ACC Fisher seems to always have a case for which he requires Crabbe’s help. (For more about Crabbe’s steak and kidney pie and the program, check out the post “Pot Pie, British Style.”)

Pie in the Sky is a witty, delightful, and dare I say delicious mystery series, and all 40 episodes are being streamed on Acorn TV through November 25. 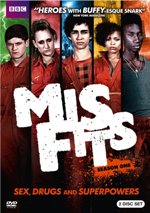 Lastly, the fourth season of the hit sci-fi series Misfits premieres today exclusively on Hulu. Several of the young-offenders-with-superpowers from the first three seasons have left the series (I won’t say how; spoilers, if you haven’t seen the show), so new ones have joined the ranks of the community servicers in this dark, funny, and violent dramedy. (For more about the series, check out the post, “Hulu Exclusive: New Season of Misfits.”)

Here’s what I’ll say about the first episode of the new season: It does not disappoint. (What’s a couple of psychopaths among juvenile delinquents?) If you haven’t seen the show or need to catch up on missed episodes, Seasons 1-3 are also available on Hulu.

Stay dry, stay safe, and have a fab week!