Fans of Doc Martin, rejoice. You haven’t seen the last of him yet. And for fans of James Corden, you’ll be glad to know that he’s returning to telly in a new series. Read on for more about these shows, plus what’s new on telly this weekend. 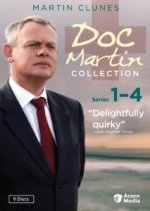 ITV has announced that Doc Martin

is returning for a sixth series. Filming of eight new episodes begins in the spring in Port Isaac, the picturesque town known to viewers as Port Wenn.

Reprising his titular role as the brusque, tactless, and blood-phobic Dr. Martin Ellingham, Martin Clunes said, “I’m thrilled to be going back to the beautiful North Cornish coast to shoot series six of Doc Martin… Our challenge this season will be to force Louisa and the doctor to live together with Baby James, which as far as I can see has disaster written all over it… And then there’s the dog and Dame Eileen, but not necessarily in that order!”

Also returning to the series are all of the regular cast members, including Caroline Catz as Louisa Glasson, the local schoolteacher and Martin’s long-suffering love interest; Eileen Atkins as his Aunt Ruth; Ian McNeice as local restaurateur and handyman, Bert Large; Joe Absolom as Bert’s son, Al; John Marquez as local police officer, PC Joe Penhale; and Jessica Ransom as Morwenna Newcross, who became the doc’s receptionist in Series 5.

The sixth series will air on ITV1 in the UK next year. No word yet on when it will air in the U.S. Stay tuned.

In other British TV news…

Russell T Davies, former head writer for Doctor Who, has confirmed that he will not be involved with the Doctor Who 50th Anniversary next year. In an interview with What’s On TV, Davies said, “I think I’d be like the ghost at the feast, what would I do – turn up and make the tea? I have asked current boss Steven Moffat not to tell me what they are planning.”

Following the success of their first partnership on the British political satire, The Thick of It, the BBC and Hulu are co-producing The Wrong Mans, a new comedy thriller starring James Corden (Gavin & Stacey).

According to Variety, Corden plays “lowly office worker Phil (who gets) caught up in a criminal conspiracy involving a car crash.” Costarring with him is fellow Gavin & Stacey actor, Mathew Baynton, who plays Sam, another clerical employee involved in the scam. Together they end up in the wrong place, at the wrong time, with the wrong skills. The six-part series will be shown in the U.S. exclusively on Hulu in 2013.

———
And new on telly this weekend…

The Secret of Crickley Hall, a three-hour miniseries adapted from the novel by bestselling British author, James Herbert, makes its premiere on BBC America on Sunday at 5PM. Just in time for Halloween, this haunted-house thriller stars Tom Ellis (Miranda) and Suranne Jones (Doctor Who) as Gabe and Eve Caleigh, who try to begin life anew with their two daughters at Crickley Hall after the their son, Cam, disappeared a year earlier.

What seems like an idyllic countryside house turns out to be anything but “when cellar doors start to open on their own, phantom children’s cries are heard through the night and a frenzied cane-wielding specter rears its head.” If all that weren’t bad enough, Eve then hears Cam’s cries. What connects the Caleighs’ son to the haunted house? And what will happen to their daughters if the Caleighs stay here? Watch The Secret of Crickley Hall to find out.

Lastly, the next new installments of Call the Midwife and Upstairs Downstairs: Season 2 air on PBS on Sunday starting at 8PM.

Have a fab weekend!