TV-wise, March comes in like a lamb this year, with just a baker’s dozen of new series and seasons from the UK and Ireland premiering nationally in the US. 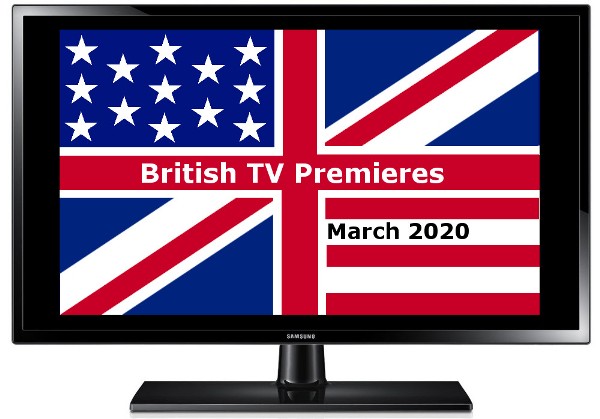 For updates about shows from the UK, Canada, and Ireland added to US linear TV and streaming channels throughout the month, see the British TV Viewing Guide.

Set on the cusp of the 19th century in Dehli, India, this six-part period drama follows the twists and turns in the fortunes and the complex relationships of the residents of the eponymous mansion, including John Beecham (Tom Bateman, Vanity Fair), a former soldier who bought the mansion to begin a new life with his family. Beecham House premieres in the US on Sunday, March 1, on the PBS Masterpiece Prime Video Channel and PBS Passport.

This comedy stars Martin Freeman (A Confession) and Daisy Haggard (Back to Life) as Paul and Ally, a couple juggling full-time careers, aging parents, a mortgage, and parenting their young children. When Ally’s estranged father appears on their doorstep, the family essentially takes on a third child. Breeders premieres in the US with two back-to-back episodes on Monday, March 2, starting at at 10 PM ET, on FX.

Set a year after the Series 1 finale, the new season of this mystery drama finds Jim Hogan (Adrian Dunbar, Line of Duty) intent on making amends with his family. One night his daughter Fiona (Gràinne Keenan, Black Mirror), suffering from the same illness as her late mother, swerves off the road into a canal. She survives, but becomes the prime suspect when the police find a dead body in the trunk of her car. Blood: Series 2 premieres in the US with Episodes 1 and 2 on Monday, March 9, exclusively on Acorn TV. New episodes will premiere weekly on Mondays.

Mark Strong (Deep State) stars in this British remake of Norwegian thriller Valkyrien as Dr. Daniel Milton, a surgeon determined to save his dying wife. To raise money to fund his research to find a cure, he agrees to treat cash-paying criminals and others who won’t go to regular medical facilities in an illegal secret underground clinic, where a Tube station employee (Daniel Mays, 1917) and a medical research (Carice van Houten, Game of Thrones) help him. Temple: Season 1, a Spectrum Original series, premieres in the US on Monday, March 9, exclusively on Spectrum Originals.

After moving to Florida in Season 1 of this comedy-drama, Mal (Philip Glennister, Life on Mars) and Jen (Lesley Sharp, Scott & Bailey) find their plans for an all-American life getting derailed by a shoot-out at their RV park. Meanwhile, their daughter gets political at school as their son starts skipping class. Living the Dream: Season 2 premieres in North America on Tuesday, March 10, exclusively on BritBox.

Based on the Agatha Christie novel of the same name, this mystery thriller follows Mark Easterbrook (Rufus Sewell, Victoria), whose name is on a list found inside a dead woman’s shoe. He begins his own investigation into how and why his name is on the list, which leads him to The Pale Horse, the home of three rumored witches. Agatha Christie: The Pale Horse premieres in the US on Friday, March 13, exclusively on Prime Video.

After her myriad addictions in Season 1 of this dramedy, celebrity PR exec Robyn (Anna Paquin, The Affair) starts to put her life back together by rebuilding her relationship with her sister and keeping her clients out of the headlines. She must also face a new and unexpected revelation head-on. Flack: Season 2 premieres in the US on Friday, March 13, at 10 PM ET, on Pop TV.

Steve Pemberton and Reece Shearsmith’s award-winning anthology series returns with a new season of dark-humored tales set inside some sort of number 9 (e.g. apartment #9), where the ordinary and mundane bump up against the extraordinary and macabre. Guest stars include David Morrissey (Britannia), Jenna Coleman (Victoria), and Maxine Peak (Silk). Inside No. 9: Season 5 premieres in North America on Tuesday, March 17, exclusively on BritBox.

Inspired by Niall Ferguson’s best-selling book The Square and the Tower, this series features the historian visiting network theorists, social scientists, and data analysts to explore the history of social networks. He examines the intersection of social media, technology, and the spread of cultural movements, and demonstrates how human behavior, disruptive technology, and profit can energize ideas and communication. Niall Ferguson’s Networld premieres in the US on Tuesday, March 17, at 8 PM ET, on PBS. (Check your local listings)

London-based Canadian comedian Mae Martin (Uncle) stars as herself in this dramedy, in which she deals with sobriety, addiction, and a new relationship with her formerly-straight girlfriend (Charlotte Ritchie, Call the Midwife). Costarring Lisa Kudrow (Friends), Feel Good, a Netflix Original series, premieres in the US on Thursday, March 19, exclusively on Netflix. (You can add it to your queue now.) 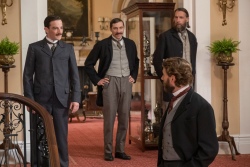 
Set in November 2003, this thriller follows Khafaji (Waleed Zuaiter, The Spy), an Iraqi ex-policeman in US Army-occupied Baghdad. He has lost everything and battles daily to keep himself and his sick daughter Mrouj (July Namir, Collateral) safe. When he learns his estranged daughter Sawsan (Leem Lubany, Condor) is missing, Khafaji is forced into a desperate search and unwilling cooperation with US and British entities. Baghdad Central premieres in the US on Friday, March 27, exclusively on Hulu. 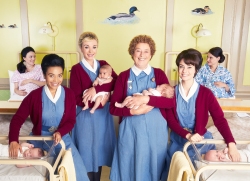 Select public TV stations will begin airing the following programs on or after March 1. Check you local listings or contact the station that serves your area for air dates and times. To request any of the shows, contact your station or American Public Television.

The Royal House of Windsor (UK)

Secrets of the Royal Kitchens (UK)

This factual series takes viewers on a journey to some of the greatest spiritual buildings and places of worship across the globe — revealing the scale, ingenuity, and faith embodied by the world’s most remarkable religious sites. Earth’s Sacred Wonders, which has been streaming on PBS Passport since November 30, 2019, has its linear TV debut on Wednesday, March 25, at 10 PM ET, on PBS. (Check your local listings)

Titles in this section begin streaming on the dates shown below on Acorn TV and its digital channels, including the Acorn TV channel on Amazon.

Based on Jonathan Gash‘s “Lovejoy” novels, this crime dramedy stars Ian McShane (Deadwood) as the eponymous antique dealer gifted at sorting the real from the fakes. His is a wild world full of aristocrats, con men, and criminals — all of whom Lovejoy goes up against with the help of his young assistant Eric (Chris Jury, Doctor Who) and his upper-crust confidante Lady Jane (Phyllis Logan, Girlfriends). Lovejoy: Series 3 begins streaming Monday, March 2, and Series 4 on Monday, March 23. (Video is from Series 1)

In this TV movie, Lizzie Hunt (Julie Walters, Harry Potter) is locked up for the murder of her husband. Drunk at the time of the crime, she has no recollection of the event, yet accepts the blame. Ten years later she returns home to the village where her son is now living, and things take a different turn when she starts to remember things. Costarring Neil Dudgeon (Midsomer Murders), The Return begins streaming Monday, March 16.

Titles in this section begin streaming on the dates shown below on BritBox and its digital channels, including the BritBox channel on Amazon.

Set inside London Hospital in the East End at the turn of the 20th century, this historical drama follows the staff and patients in the Receiving Room (ER), who reflect the social and medical crossroads of the era. Every situation and character is based on real cases, people, and events — all taken from the hospital’s records, nurses’ ward diaries, and memoirs. Casualty 1900s: Seasons 1-2 begins streaming Friday, March 13.

This medical soap opera, a spin-off of The Royal, is set at the same hospital as the popular series but in 2008 instead of the late 1960s. Each episode of the 50-episode season follows the events of a single day. Starring Andrew Scarborough (Emmerdale) and Fiona Dolman (Midsomer Murders), The Royal Today begins streaming Friday, March 13.

Adapted from the first two books in Mark Billingham‘s best-selling “Tom Thorne Novels” series, these crime dramas star David Morrissey (The Walking Dead) as DI Tom Thorne. In Sleepyhead, Thorne is on the trail of a serial killer who induces strokes in his victims to kill them. In Scaredy Cat, double murders happen at the same time, and evidence suggests that two different killers are working separately but in tandem. Thorne: Sleepyhead & Thorne: Scaredy Cat begin streaming Friday, March 27.

Titles in this section begin streaming on the dates shown below on Sundance Now and its digital channels, including the Sundance Now channel on Amazon.

In this psychological thriller, former police detective Robert (Christopher Eccleston, Doctor Who) and his wife Katy (Marsha Thomason, White Collar) turn their picturesque guest house into a safe house after being persuaded by one of Robert’s former colleagues. Robert then finds himself drawn into a game of cat and mouse between a dangerous offender and the family he is trying to protect. Safehouse: Season 1 begins streaming Thursday, March 12.

For details about the March premieres of shows from Australia and New Zealand, visit The Down Under TV Place. For those about the debuts of original-language, English-subtitled programs from Europe, visit The Euro TV Place.