Namaste, Brit TV fans. Just in time to get your binge-watch on this weekend is the newly-arrived, fabulous comedy-drama, The Indian Doctor, starring Sanjeev Bhaskar.

It isn’t often that I stream an entire season of a show in one sitting, but I did with the BBC daytime dramedy, The Indian Doctor, because it is that good. With two more seasons to go, my weekend viewing is now set. And you should give it a go, too.

The multiple award-winning series has shades of Doc Martin, Call the Midwife, and WPC 56, with its quirkiness, rockin’ ’60s soundtrack, and feel-good themes about fitting in, overcoming prejudices, and demonstrating courage in the face of possible ruin.

Sanjeev Bhaskar (The Kumars at No. 42, Goodness Gracious Me, Inspector Lewis, Silent Witness) stars as the titular doctor, Prem Sharma, a highly-educated physician who moves with his upper-class wife, Kamini (Ayesha Dharker, Coronation Street, Waking the Dead, Doctor Who), from Delhi, India, to join the UK’s new National Health Service in 1963.

Only things don’t turn out the way they expected. Instead of landing in the exciting capital city of London, Prem and Kamini discover that his new NHS post is in the small coal mining village of Trefelin in Wales. 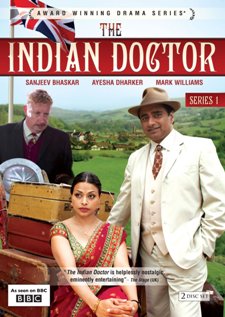 Prem and Kamini find that what they left Delhi for isn’t what it’s cracked up to be. Until the late Dr. Elwyn’s and Prem’s new assistant, Gina Nicolli (Naomi Everson, Atlantis), clues him in, Prem doesn’t realize that everyone in his surgery’s waiting room isn’t actually ill. And now that she is without the dozen or so servants the couple had back home, Kamini has to figure out the kitchen… and how to get the heck outta Dodge (or Trefelin, as it were) to a more suitable place, namely London.

For the villagers, the Sharmas’ arrival means adjusting (or not) to having an outsider, a non-Welshman, an Indian(!), tend to their maladies. Some, like Megan Evans (Mali Harries, Hinterland), miner Owen Griffiths (Ifan Huw Dafydd, Stella), and shop owner Sian Davies (Erica Eirian, Coronation Street)), are more welcoming than others, such as Megan’s wanna-be-singer stepson, Tom (Alexander Vlahos, Merlin).

On both sides of the fence is the Coal Board’s local manager, the smarmy Richard Sharpe (Mark Williams, Father Brown). He befriends Prem to the degree that he wants to keep him from meddling in his business. Sharpe has a dark secret, you see, one that Dr. Elwun knew and kept hidden in one of his diaries — a diary that Sharpe needs to get his dirty mitts on to save his secret getting out, only it’s disappeared from the surgery. Then Prem comes into possession of it, and with Megan’s help, discovers the devastating truth the pit manager has been hiding. But proving Sharpe’s malfeasance is made difficult when the diary goes missing again.

With most of the villagers believing Prem is in the Coal Board’s pocket and in cahoots with Sharpe, the good doctor is losing patients left and right. No patients means no practice, and Prem ultimately agrees with Kamini that Trefelin isn’t for them, and the couple starts packing for their return home… until Owen’s twelve-year-old son, Dan, goes missing, too.

As friendships are forged and trust is hard won amidst the x-ray picket and emergency house calls (some more, um, interesting than others), Prem and Kamini begin coming to terms with a secret of their own.

There is so much to like in the first series

of The Indian Doctor, from the mystery of the diary and the unexpected mother-son type friendship between Kamini and Dan, to the antics of Sharpe’s hoity-toity, sex-starved wife, Sylvia (Beth Robert, Stella), and the blossoming relationship between young Gina and Tom.

The Indian Doctor is a lighthearted and fun watch, and I enjoyed every minute of the first series’ five episodes. Now I’m looking forward to the ten in the second

(Whether I binge-watch them, too, remains to be seen.)

All three seasons of The Indian Doctor are now streaming in the US exclusively at Hulu Plus (subscription required). Check it out and see for yourself how good it is.