The rumors that have been swirling for months are now officially fact. The doors of Downton Abbey will close after Season 6.

Per today’s announcement from Carnival Films and MASTERPIECE on PBS, Season 6 of the hit drama series, Downton Abbey,

will be the final season.

A co-production of Carnival Films and MASTERPIECE, Downton Abbey is the top PBS drama of all time and the most popular series in MASTERPIECE’s 44-year history. It has been a runaway hit since it premiered in 2011, often beating the competition in its Sunday night time slot, and been widely credited with reigniting American viewers’ passion for British drama.

“Millions of people around the world have followed the journey of the Crawley family and those who serve them for the last five years. Inevitably there comes a time when all shows should end and Downton is no exception. We wanted to close the doors of Downton Abbey when it felt right and natural for the storylines to come together and when the show was still being enjoyed so much by its fans. We can promise a final season full of all the usual drama and intrigue, but with the added excitement of discovering how and where they all end up…”

“PBS and our member stations have been so proud to be the home of Downton Abbey on MASTERPIECE in the United States,” said Paula Kerger, President and CEO, PBS. “We, like the fans, simply cannot wait to see what will happen to the Crawley family and their beloved staff as this incredible series culminates in Season 6. The series has enjoyed such success over the past five seasons and we’ll certainly be working alongside Carnival, MASTERPIECE and PBS member stations to make Season 6 the biggest yet.”

was seen by 25.5 million people, and had a weekly average audience of 12.9 million viewers over its nine-week run, a figure nearly even with that of Season 4‘s

13.3 million.* The fifth season also had impressive online streaming numbers, with more than 12.6 million streams of full episodes across all PBS and station digital platforms, 13% more than Season 4.** And on social media, Downton Abbey set records for tweets of a PBS show, with Season 5 generating more than 190,000 total tweets and more than 24 million total impressions^, placing it in Nielsen Social’s Daily Top 5 for series and specials seven times over nine weeks.^^

Not only has Downton Abbey been a hit with viewers, it has also been one of the most honored series on television. Of its 51 Emmy® Awards nominations, more than any other British show in Emmy history, it won 11. It has also won three Golden Globes®, including for Best Mini-Series or Motion Picture Made for Television, and Best Performance by an Actress in a Supporting Role awards for both Maggie Smith and Joanne Froggatt. The show was also awarded three BAFTAs, three Screen Actors Guild Awards, and a Producers Guild Award.

“Downton Abbey has been a television executive’s dream come true: a beautifully-made, returning series that captures a nation’s attention and becomes a household name. It’s been a game-changer for MASTERPIECE,” said MASTERPIECE Executive Producer Rebecca Eaton. “We are indebted to our UK partners for making a show which will go down in television history, not just for its impeccable writing, acting and production values, but most importantly, for its enormously warm-hearted audience appeal.” 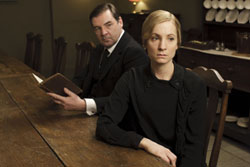 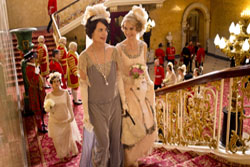 An indelible part of pop culture now, Downton Abbey has been parodied by Jimmy Fallon and Stephen Colbert…

… and on Sesame Street and Saturday Night Live…

Even George Clooney and Jeremy Piven paid a visit to Downton in ITV’s Text Santa fundraiser in 2014.

Downton Abbey has been the topic of countless discussions on Twitter and Facebook, and has garnered as much publicity as any series on television, with the cast gracing the covers of Entertainment Weekly and TV Guide and appearing on TODAY, Good Morning America, and The View, amongst others.

Julian Fellowes, writer and creator of Downton Abbey, said, “The Downton journey has been amazing for everyone aboard. People ask if we knew what was going to happen when we started to make the first series and the answer is that, of course we had no idea. Exactly why the series had such an impact and reached so many people around the world, all nationalities, all ages, all types, I cannot begin to explain. But I do know how grateful we are to have been allowed this unique experience. I suspect the show will always be a principal marker in most of our careers as we set out from here, and if so, I consider that a blessing and a compliment.”

While tidbits about the upcoming storylines have not been offered up yet, photos of a read-through for Season 6 of Downton Abbey have been.

The End of Downton Abbey: A Look Back and a Look Ahead (with Pics!)
Tagged on: Downton Abbey    ITV    Masterpiece    PBS