A new bromance crime drama, the continuation of a Welsh noir detective drama, and full series of two thrillers whose pilot episodes have garnered rave reviews, are just some of the shows we can look forward to in the coming months.

Through the course of their work, the pair of opposites come up against the rich and powerful members of the establishment, from criminals and corporations to individuals and governments, and develop a bond over their shared status as underpaid and unappreciated outsiders with huge debts and little job security. And they realize that, by combining their skills and resources, they make a formidable crime-solving team.

Stay tuned for further details about the cast and BBC One premiere date, and whether New Blood will screen in the US.

Hinterland Special
Despite the devastating Series 1 conclusion of Hinterland

that left DCI Tom Mathias (Richard Harrington) even more haunted than he was when we first met him, Chief Superintendent Prosser (Aneirin Hughes) wants Mathias back at work. So the detective goes, to the surprise (resentment even) of his colleagues.

An arson has left a mother and son in hospital after a fire ripped through their isolated farmhouse, and the prime suspect swears he didn’t set the place alight. Off the job, bits of Mathias’ past get revealed. (Ooh.)

The feature-length Hinterland special screened on New Year’s Day in Welsh (with English subtitles) on S4C in Wales and BBC iPlayer in most other parts of the UK. It will air on BBC Wales this spring, and likely on BBC Four afterward. Fingers crossed that Netflix will stream it for US subscribers, too. As for Series 2, filming is well underway. 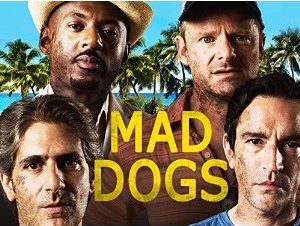 As noted in this post, I thought the pilot episode of Amazon’s remake of the Brit hit, Mad Dogs,

was great. So hurrah that the internet retail giant and production studio has greenlit the dark dramedy for a full series.

According to executive producer Shawn Ryan, the US version will have similarities to, but also diverge from, the original, so it will be interesting to see how the four forty-something friends get themselves out of the dangerous situation they’re in in Belize. 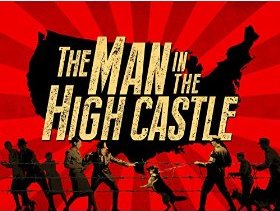 Another full-series commission was greenlit for The Man in the High Castle,

which features Brit actors Rupert Evans (Fleming, World Without End) and Rufus Sewell (Zen, The Pillars of the Earth) amongst the international ensemble cast.

by Philip K. Dick, the thriller is set in 1962, nearly 20 years after the Allies lost World War II. The US has been split into the Greater Nazi Reich on the east coast, the Japanese Pacific States on the west, and a neutral zone (in the Mountain Time Zone). Stress between the two powers is mounting, and their peaceful coexistence could shatter once the ailing Hitler dies. As for members of the resistance, things aren’t looking so good. And who exactly is the mysterious man in the high castle? (If you haven’t seen the pilot episode, it is definitely worth checking out.)

The first seasons of Mad Dogs and The Man in the High Castle will premiere exclusively on Amazon Prime Instant Video in the US, UK, and Germany later this year or in 2016.