Stephen Tompkinson, Andrea Lowe, and Caroline Catz are returning to telly in the fourth series of DCI Banks. Need I say more?

Yorkshire. The largest county in the UK is the home of the York Minster cathedral, UNESCO World Heritage Site Saltaire Village, and Skipton Castle.

It’s also the setting for the hit Brit crime drama, DCI Banks, which reunites stars Stephen Tompkinson (Wild at Heart, Drop the Dead Donkey), Andrea Lowe (Inspector Lewis, The Tudors), and Caroline Catz (Doc Martin, Murder in Suburbia) for the fourth series that fans have been clamoring for since the third completed its run last year. 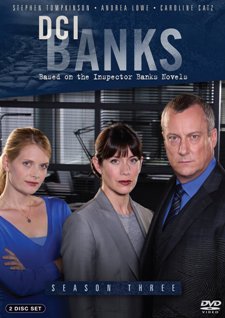 Why is DCI Banks

so popular? Lowe answered: “I think audiences love the drama because it’s very fast-paced and keeps you on your toes. It’s not easy to work out whodunit, especially compared to some other crime dramas. There are a lot of red herrings in DCI Banks. You can’t spot the murderer until the final reveal, and that comes down to great casting and good crime stories.

“As well as good crime stories there are good character stories running throughout the series. They are about life, love and relationships. This year there is the ongoing relationship between Banks and Annie, and Helen has problems at home with her family.

“The location is also very much part of the drama. Where we film in Yorkshire brings atmosphere. It has a good feel to it, but with a dark energy that’s really powerful.”

According to Catz, Series 4, which opens a year after the Series 3 conclusion, is one of the best. “I think this year the stories are very strong on the crime front. They are even more exciting and intriguing and there are a lot of surprising twists.”

While most of the earlier DCI Banks episodes were adapted from the novels by Peter Robinson,

Said Tompkinson, “It’s lovely to have done individual stories of our own based on Peter’s books. We’ve tried to keep to his individual style of writing, which includes very interesting moral grey areas. The scripts for each of the three stories… are very good. They are full of intrigue!”

The first story, “What Will Survive,” centers on the murder of a young woman found buried alive. Once the team identifies the victim from one clue, they trace her movements and connect her to a driver and his autistic son. Soon thereafter, another crime takes another life. Banks himself suffers a deeply personal loss, two if you count Annie’s reuniting with David (Edward MacLiam, Holby City), the father of her daughter, Isla.

The body of an Asian attorney is found washed up by an underground river in “Buried.” Evidence indicates a former employee is the killer, a man who’d been having an affair with the victim and been fired by her law firm partner/husband. However, an interview reveals that the killing might have been a matter involving a different family member… until another body turns up and the team has a double murder on their hands. Meanwhile, Annie gets an offer that she may or may not refuse, and Helen has some secrets about her home life that bubble up to the surface.

And in “Ghosts,” an undergraduate’s body is found dumped in a ravine. His friends claim he was a model student, but the facts of the victim’s double life soon come to light. As the team investigates the murder, Helen realizes that her former lover, an undercover officer, is following the prime suspect and seems to be involved in the crime.

DCI Banks: Series 4 premieres in the UK on Wednesday, 4 March 2015, at 9 PM GMT. Stay tuned for details about the new season debut on public TV stations in the US.