You’ve got to hand it to the book editors at Amazon. Out of the 271,852 listings under the online retailer’s “Mystery, Thriller & Suspense” category, they managed to cull them down to a list of the 100 Mysteries & Thrillers to Read in a Lifetime.

Brit TV-obsessed as I can be, I was curious about how many of the titles had been adapted for UK television. 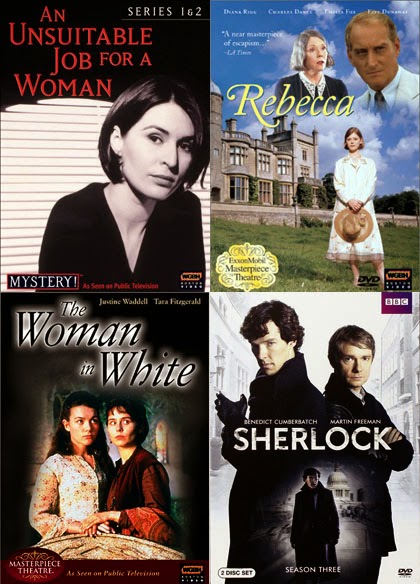 Researching all 100 titles was a bit more than I cared to take on, so I focused on the ones that were written by authors from the UK and Ireland.

For the sake of simplicity, series of written works with a particular lead character (e.g. Sherlock Holmes, Hercule Poirot) count as one title (as on the Amazon list), which brought the list down to a manageable 24. Of them…

These 9 titles have been adapted into British TV series or made-for-TV movies:

These 11 titles have been or are being adapted into feature films, British or otherwise:

And these 4 titles have not been adapted to date:

I love reading as well as watching a good mystery or thriller, and there are many on Amazon’s list

that I haven’t read yet, so guess who’s going shopping!

Brit TV Adaptations of Works on Amazon’s 100 Mysteries and Thrillers to Read in a Lifetime
Tagged on: An Unsuitable Job for a Woman    And Then There Were None    Dr. Jekyll and Mr. Hyde    Gaudy Night    Murder on the Orient Express    Rebecca    Sherlock Holmes    The No. 1 Ladies' Detective Agency    The Woman in White