Woot and double woot! Because Scott & Bailey is returning for a fourth series!

ITV has recommissioned the police procedural drama Scott and Bailey for a fourth series, which means one of Brit TV-dom’s favorite detective duos is returning to telly. Hooray!

Lesley Sharp and Suranne Jones will reprise their roles as DS Janet Scott and DC Rachel Bailey, respectively, as will Amelia Bullmore as DCI Gill Murray. Bullmore will also write four of the scripts for the new series.

Scott and Bailey is based on an idea by Suranne Jones and fellow actress Sally Lindsay, who plays Bailey’s sister Alison in the drama.

Co-creator and writer Sally Wainwright (Last Tango in Halifax, Unforgiven, The Amazing Mrs Pritchard), will executive produce the new series with Nicola Shindler (The Syndicate, Blackout, Leaving), who is Director of Red Production Company, which produces the series.

Said Shindler of the new series:

“We’re thrilled to be producing a new series of Scott and Bailey. It’s rewarding to think the public have become so familiar with the characters and taken them to heart. With this new series, we have the chance to explore great story ideas and continue developing those characters.” 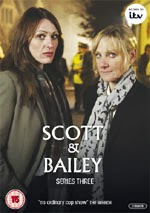 As one of ITV’s most enduring and successful returning series, Scott & Bailey‘s ratings and share of audience have increased during the program’s three series to date, most notably for the Series Three

finale, which was watched by an average 7.1 million viewers and delivered a 27% share when it aired on ITV earlier this year. (It was quite the nail-biter.)

Steve November, ITV’s Director of Drama, who commissioned Scott & Bailey, had this to say:

“ITV Drama without Scott and Bailey would be unthinkable. Its reputation for quality storytelling and great characterisation precedes it and it’s become a firm favourite with ITV viewers. We’re delighted to be working with Nicola, Sally and Red Production Company on a fourth series.”

The fourth series of Scott & Bailey will go into production on location in Manchester in Spring 2014. No date has yet been set for the premiere in the UK, and it’s too early to know if the series will be distributed in the U.S.

As with other fans of Scott & Bailey, I cannot wait for the fourth series. Fingers crossed that local PBS member stations pick up both Series 3 and 4 for stateside viewers, as they did with the first two series. Speaking of, Series 1

DVDs will be released in the coming weeks for the North America market. Both are available for pre-order now.