Gotta love those Google Maps Easter Eggs, the fun-filled holiday goodies transformed by Google into something everyone can enjoy all-year round.

The latest is Google Maps’ 360-degree look inside the TARDIS (Time and Relative Dimension in Space), the space-and-time travel ship used by The Doctor and his companions in Doctor Who.

While Google Maps doesn’t provide access to the TARDIS swimming pool, library, or companions’ sleeping quarters, you can get a close-up view of the TARDIS console and see what’s on The Doctor’s monitor. 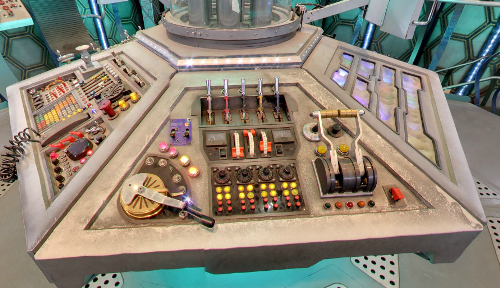 And if you’d like to comment on the TARDIS, you can do so on the Police Telephone Box Google+ page.

To visit the TARDIS physically instead of virtually, head to the Earls Court tube station in London. Directly outside it you’ll find one of the only two police boxes that still exist with the original police box design used for the TARDIS.

As Clara said, “It’s smaller on the outside.”

(To read more about the real-world police telephone box in Earls Court, check out “A Walk Through Earl’s Court In West London” by my friend, Jay, a.k.a. aquarian_insight.)