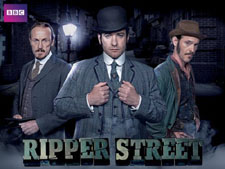 BBC America announced today that the second season of its hit Victorian-era crime series will be returning to our screens in December!

The eight-episode-long Season 2 of Ripper Street

Moral collapse. Ever-present crime. And H Division in the thick of all of it… Ooh, sounds positively criminal in an entertainment kind of way.