Yes, pet. ITV has commissioned a fourth series of its hit mystery-crime drama, Vera, months before the third series has even premiered. Now that’s what I call a demonstration of commitment and trust. 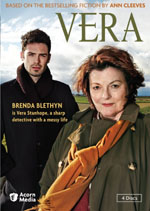 It’s well deserved. The writers have consistently delivered tight scripts and the actors solid performances. Audience-wise, roughly 6 million viewers in the UK tuned in each week for the first two series, and in the U.S., the show has a strong fan base, judging by local PBS stations’ airings and re-airings of the first eight episodes.

Based on the crime novels by British author Ann Cleeves,

Vera stars BAFTA and Academy Award nominee Brenda Blethyn (Little Voice, Secrets & Lies) as the titular DCI Vera Stanhope, a frumpy, bad-tempered, keen detective with a habit of calling people “pet.” Assisting her in investigating murder after murder in Northumberland is dedicated, trusted, and put-upon DS Joe Ashworth (David Leon, RocknRolla), a family man who’s as close to being family to Vera as any non-relation is going to get. 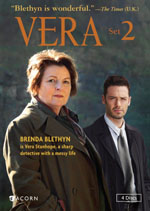 The third series of Vera debuts in the UK this summer on 25 August 2013, and consists of four feature-length episodes. Production on the fourth series is slated to begin in June, and its four episodes are expected to air in 2014. Fingers crossed that both series make it stateside soon after they finish airing across the pond.

If you haven’t yet seen Vera,

your local PBS station might be airing it, so check your local listings. If not, you can stream the first eight episodes on the Idaho Public TV website (while they’re still available there) and Amazon Instant Video.