Famed British actor Richard Griffiths died one month ago yesterday, and Acorn TV is celebrating his life with a marathon of his hit detective dramedy Pie in the Sky. 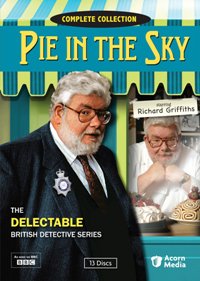 Griffiths, who was 65 when he died from complications following heart surgery, had appeared in film and television and on stage and radio throughout his decades-long career.

He appeared in more than 35 films, including the cult hit Withnail and I and The History Boys, in which he reprised his award-winning stage role of Hector the teacher. But it was with the mega-success of the Harry Potter films that Griffiths became a household name worldwide for his portrayal of Harry’s abominable uncle Vernon Dursley.

On television, Griffiths appeared in nearly 60 programs, with guest-star roles in the mysteries Inspector Morse and Lovejoy and the sitcoms The Vicar of Dibley and Episodes.

His longest-running starring role on television was as the gentle, kind, and thoughtful gourmand, chef, and detective DI Henry Crabbe in the hit BBC mystery-crime dramedy Pie in the Sky.

Griffiths was utterly delightful as Crabbe, whose talent behind the stove is equal to his skill as a detective. His steak and kidney pie becomes his trademark dish after opening his (technically his wife’s) restaurant, Pie in the Sky. As for police work, he’d just as soon take early retirement than investigate another case, but his finance-focused wife Margaret (Maggie Steed) dissuades him and his self-serving boss, ACC Fisher (Malcolm Sinclair), blocks his path. What’s a chef-detective to do but double duty?

From soup to nuts, Pie in the Sky

is marvelous, a refreshing blend of whodunit and light comedy with a dash of cookery lessons to top it off.

For five weeks beginning today (29 April-2 June), Acorn TV is streaming all 40 episodes of Pie in the Sky, so catch them while they’re available here because no other video service in North America has the series available for streaming. And when you sign up for a 30-day trial membership, you can watch them all for free.