PBS will be giving detectives a holiday and putting barristers front and center when the network brings Silk to Masterpiece: Mystery! later this summer. 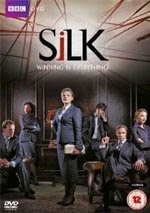 debuts on PBS in August.

Written by former barrister and BAFTA Award winner Peter Moffat (Criminal Justice) and based on his experiences at the Bar, Silk revolves around a group of barristers in the highly-competitive, high-stakes games of their careers.

For rival barristers Martha Costello (Maxine Peake, Shameless) and Clive Reader (Rupert Penry-Jones, MI-5), that means winning cases in their pursuit of both justice and “taking silk” — being the sole barrister from their chamber to be appointed a Queen’s Counsel (QC) and thus earning the right to wear the coveted silk robes that QCs wear in Court.

For competing barrister-in training pupils Nick Slade (Tom Hughes, Page Eight) and Niamh Cranitch (Natalie Dormer, The Tudors), it means proving they have what it takes to be both a full-fledged barrister and the lone pupil selected as a member of chambers.

Other cast members include Alex Jennings (The State Within) as Head of Chambers Alan Cowdrey QC, and Neil Stuke (Reggie Perrin) as Senior Clerk of Chambers Billy Lamb.

In a piece in The Telegraph, Moffat said this about his series:

“I wanted Silk to be full of politics and intrigue. From my experience at the Bar, I felt life in chambers had all of those components, with big stories and lots of courtroom drama – but I wanted to make it as much about barristers and their life in chambers as about the trials… I wanted to make sure that every big case, every trial in every episode, brings with it a really meaty, complex ethical or moral dilemma, which will affect the barristers in their professional and even personal lives.”