BAFTA and Golden Globe Award winner Bill Nighy is returning to television after what will be a three-year absence from the small screen. (And I, for one, could not be more excited!) Not just that, he’s reprising his role as MI-5 spook Johnny Worricker. 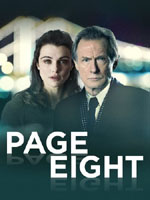 Nighy’s last television role was as Worricker in Page Eight,

the first part of writer and director David Hare’s The Worricker Trilogy, which aired in 2011 on BBC Two in the UK and PBS’ Masterpiece Contemporary in the U.S. His return as Worricker will be in the upcoming second and third parts, Turks & Caicos and Salting The Battlefield, respectively.

“We have assembled a most extraordinary cast for these two films. I think there may be two reasons – first and foremost, because so many actors want to appear alongside Bill Nighy, but secondly, because people responded so strongly to the feeling of Page Eight – all the fun of spy fiction, I hope, but, for once, bang up to date and based in the real intelligence dilemmas of the last 10 years.”

With the Director General of MI-5 dead, his job as an MI-5 intelligence analyst gone and his life in danger, Worricker did what any self-respecting spook would do. Disappear. When we last saw him, he was at the airport, clutching a plastic bag full of cash, dumping the top secret report in the rubbish bin, and heading for parts unknown.

Well, now we know where he landed: the British Overseas Territory of Turks & Caicos. In Turks & Caicos, Worricker not only has MI-5 and Downing Street to contend with, the CIA is forcing him “to deal with a group of ambiguous Americans who are on the islands for a high-level conference on the world financial crisis. At the same time, an old girlfriend, Margot Tyrrell, is being asked to betray her boss in London in order to establish an illicit connection between the Prime Minister and dark goings-on in the war on terror.”

In Salting The Battlefield, life for Worricker and Tyrell is difficult. They’re back in Europe and on the run from MI-5. “Worricker knows that his only chance of resolving both his personal and his professional lives is if he returns home to confront the powerful prime minister, Alec Beasley. In a duel of wits between the two men, there will be only one winner.”

Both Turks & Caicos and Salting the Battlefield are productions of Carnival Films and BBC. No announcement has been made yet regarding production and air dates, so stay tuned.