Lifetime never got its remake of the Brit TV hit Mistresses off the ground, but ABC has, and the broadcast network is premiering it as part of its 2013 Summer schedule in a few weeks. 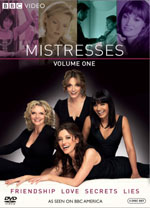 While the characters and some of the storylines are nearly identical (e.g. married couple try to conceive, doc has an affair with a patient), little else about the U.S. version of Mistresses is remotely reminiscent of the UK original, if the trailer is anything to go by.

It appears that ABC has taken the fine, intricate, well-woven drama from the BBC and reduced it to a superficialized, over-sexified, and trashified version of its former British self.

Based on the trailer, we can expect the remake to include lots of (pseudo) sex, dialogue related to sex, scenes leading up to and following sex, and not much more beyond that. This wouldn’t necessarily be a bad thing if it weren’t for the fact that the show is a remake of a hit, and as such would have done well to keep more than the characters’ general occupations and personal stories intact.

Not that the BBC’s version didn’t have its fair share of snogs, shags, and trashy bits. It did. However, what seems to have gotten lost in the British-to-American translation is the substantive essence of the original.

If ABC’s Mistresses has more depth than what the trailer indicates, then they did a poor job of conveying it. All I’m left with is that the remake is of the one-night-stand variety, whereas BBC’s Mistresses had more than just sex in common with viewers and thus gave fans a three-series relationship.

Whether you have or haven’t seen the original Mistresses, you can watch or re-watch all sixteen episodes via streaming at Amazon Instant Video