It’s been a while since PBS has had a first-run British mystery on its schedule, so if you’ve been hankering for a whodunit since Wallander 3 concluded last autumn, hanker no more. The Bletchley Circle

makes its U.S. debut tonight on the public television network.

The story opens in 1943 at Bletchley Park, the HQ for Britain’s military decryption work during World War II. It is here that codebreaker Susan (Anna Maxwell Martin, South Riding, Bleak House) believes she’s found a code pattern seemingly for a German officer’s reassignments; however, the ultra-encryption of the codes leads her to think they’re for something sinister instead of merely administrative.

Susan confides her suspicions to map expert Millie (Rachael Stirling, Tipping the Velvet, Boy Meets Girl), who prompts her to tell their boss Jean (Julie Graham, Survivors, William and Mary), who then tells her to “take it to the House” after Lucy (Sophie Rundle, Episodes, Titanic) rattles off from (photographic?) memory a litany of infantry-to-tanks-and-back-again “reassignments.” Turns out Susan was spot on and gave the British military critical information about German troop activity. Huzzah!

Fast forward nine years. Several young women have been murdered, the police haven’t solved the crimes, and Susan, now a housewife with two kids, sees a pattern in the killings that the police have apparently missed. Well, you can take Susan out of Bletchley, but you can’t take the codebreaker out of Susan. She’s been keeping track of the murders’ whens, wheres and whos on the back of her dressing table mirror, out of sight from her family who know nothing of her codebreaking past, thanks to the Official Secrets Act.

To make the police aware of this pattern and hopefully put an end to the serial killings, Susan enlists the (somewhat reluctant) help of her (rather condescending) husband Timothy (Mark Dexter, Coronation Street). He had served in the war with, and introduces her to, now Deputy Commissioner Wainwright (Michale Gould, Margaret Thatcher: The Long Walk to Finchley), who correctly infers the reality of her work at Bletchley, gives credence to her claims, and sets his officers off on a search. Unfortunately, they find nothing useful, and a discouraged Susan dismantles her “incident” board and throws everything from it into the fire. All except a photo of Susan, Millie and Lucy from their Bletchley days, with a note from Millie to Susan reading “Never be ordinary.”

With that, the puzzle-loving, pattern-seeing, anything-but-ordinary former codebreaker finds Millie the map specialist (now back from her post-war travel adventures, living in a bedsit and working in a café) and shares her theory with her. It is Millie who insists that they need more help if they are to find the pattern that leads to the killer, specifically help from Lucy (now married to a tosser) for her incredible memorization and recall of data, and Jean (now a librarian) for her access to that data, especially the classified and restricted kind.

The four women gather at Susan’s home for her to fill them in on why she needs their help.

“How many more women will die before the police catch him? We can do better. He’s making a pattern. He doesn’t even realize he’s doing it… If we get ahead of him, we can stop him before he kills again… Treat the killings like a code, keep at it ’til we break it.”

An impassioned and motivating set-up, right? It was… until Susan suggests, “Perhaps we can do more [than take it to the police]. Perhaps we can find him.” At which point Jean, Lucy and Millie decide it’s too dangerous and take their leave… until they learn another woman has gone missing. 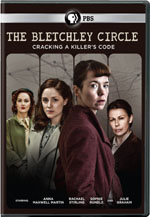 And so begins their hunt for a killer.

During the course of the miniseries, Susan, Millie, Lucy and Jean find several patterns. But which pattern is the right one? The one that will help them identify the killer and lead them to him? They also knowingly and unwittingly put themselves and others in danger.

is a different kind of mystery in that there aren’t the usual clues along the way from which viewers can deduce who the killer might be from among the stable of suspects (although we do get glimpses of the killer, his victims, and his perpetrating his crimes). Here there are no suspects, at least not official ones. Be that as it may, the series is quite engrossing and entertaining, and I hope ITV commissions a second series.