The third series of Sherlock doesn’t begin filming until next Monday, 18 March, but Benedict Cumberbatch has already announced that he and costar Martin Freeman will be back as Holmes and Watson for a fourth series of the hit crime drama. 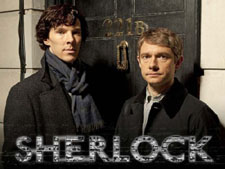 “We’ve agreed to two more series but I could get into trouble for saying that… All I know at the moment is I’m doing these three [episodes of Series Three] and another three.”

As for the possibility of doing a fifth series and beyond, he added:

All three have been engaged, and will likely continue, on Hollywood films and/or other high-profile programs, including Cumberbatch as the villain in J.J. Abrams’ Star Trek Into Darkness, Freeman as Bilbo Baggins’ in Peter Jackson’s The Hobbit film trilogy, and Moffat as the showrunner for the phenom sci-fi hit Doctor Who. 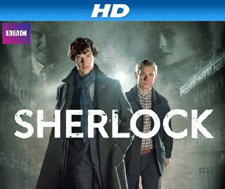 About the third series of Sherlock, Cumberbatch shared this about the first episode:

“You are in for an absolute stonker.

It’s going to be a treat… It’s a terrific episode.”

Finally. We no longer have to speculate, but learn the facts behind Sherlock surviving his fall from the roof of St. Bart’s Hospital, not to mention his burial, in the Series Two shocker of a finale, “The Reichenbach Fall.”

Sherlock: Series Three is slated to premiere this autumn in the UK. No word yet on when it will arrive stateside. Stay tuned.