The fifth series of the hit BBC One detective drama, George Gently, is making its debut in North America — not on BBC America or PBS, but the streaming service Acorn TV.

Martin Shaw (Judge John Deed, Death in Holy Orders) returns as Inspector George Gently in four new feature-length episodes that premiere on 18 March 2013 on Acorn TV, the only streaming service in the U.S. and Canada that is dedicated to showing British TV programs.

Set in 1968 Northumberland, this series has Gently and his sidekick Sergeant John Bacchus (Lee Ingleby, Place of Execution, Crooked House) investigating cases amidst more of the social changes that were sweeping the globe and taking hold in England at the time. The first episode — “Gently Northern Soul” — is set against the backdrop of the assassination of Martin Luther King, Jr. and sees racial unrest intensifying as British politician Enoch Powell launches his tirade against immigration. But racial harmony can be found at the all-nighters, where disillusioned young people, black and white, escape the boredom of factory life and dance the night away to imported soul music.

In Newcastle, the haven of equality found at the Carlton Ballroom all-nighter is destroyed when a young black girl, Dolores Kenny (Pippa Bennett-Warner, Case Histories), is murdered, leading Gently to uncover a disturbing and racialist undercurrent growing within the local community and the police force. Refusing to let deep-seated prejudices cloud their vision, Gently and Bacchus work to uncover how Dolores died. Guest stars include Lenore Crichlow (Being Human) and Eamonn Walker (Oz).

“Gently With Class” shows a darker side of 1968 as workers and students riot in the streets of Paris and thousands rally against the Vietnam War across the United States. In England, antipathy for the upper classes’ outmoded social graces and their abuse of privilege is growing by the day.

Gently and Bacchus experience the inflated authority of their “social betters” firsthand, when the young, beautiful, and free-spirited Ellen Mallam (newcomer Ebony Buckle) is found dead in the passenger seat of a an upturned car registered to local aristocrats. As always, they clash over their differing opinions: Bacchus believes that the aristocracy’s days are numbered, whilst Gently feels that the ruling class will stay impenetrable as ever. Guest stars include Roger Lloyd Pack (The Vicar of Dibley) and Geraldine Somerville (Harry Potter) as Lord and Lady Blackstone.

In “The Lost Child,” Gently and Bacchus gain insight into the complex and emotionally-wrought world of “Mother and Baby homes,” where many single mothers are forced to go by their families to escape the shame of their illegitimate children and to get the babies adopted into “proper” married homes.

The adopted child of a middle-class couple is kidnapped, and suspicion initially falls upon the natural mother. Did she “steal” back her own baby? But the detectives’ investigation into the Mother and Baby home itself reveals a much darker side to this hothouse of morality, and raises questions as to how far this seemingly perfect couple is prepared to go to get a child. Guest stars include Alison Steadman (Gavin & Stacey), Helen Baxendale (Cold Feet), and Mark Gatiss (Sherlock). 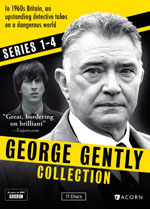 Lastly, in “Gently In The Cathedral,” enemies from Gently’s past in London, including criminals he put away and ex-colleagues at the Met, are now after him in Durham. Underworld figure Rattigan, whom the inspector sent down four years earlier for the murder of his (Gently’s) wife, has been cleared on the grounds that evidence was fabricated by Gently himself, and now he is hell bent on revenge.

Donald McGhee (Kevin Whately, Inspector Lewis), Gently’s friend and colleague from the Met, appears on the scene, but can Gently trust him? Bacchus is torn between his loyalty to Gently and his ambition to make it to the Met. Gently finds himself suspended from duty — powerless, unprotected and persecuted. If he is to survive, he must confront his deepest fears and fight for his life. Guest stars include Diana Quick (Brideshead Revisited) and Nigel Lindsay (Clatterford), and Melanie Clark Pullen (Eastenders) returns as Bacchus’ estranged wife Lisa.