Whether you’re a decades-long viewer or a newbie to British TV programs, you’ve probably heard one or more British slang terms while watching them that made for a bit of head-scratching. Well scratch no more, because now there’s a book to help you differentiate between British slanguage niceties and naughtiness. 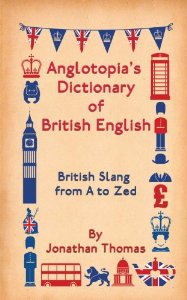 It’s Anglotopia’s Dictionary of British English: British Slang from A to Zed

by Jonathan Thomas. And it’s chock-full of slang words and phrases used by many Brits in shows on telly and pubs in the UK.

When asked why he created a new British slang dictionary when there are others already available, and how his is different from them, Thomas replied:

“Ours is the first British Slang Dictionary to come out in over 5 years, so the others on the market are a little outdated. Some of the others also categorize the entries, instead of presenting them all in one giant dictionary list (this makes finding a specific word easier). Ours is also more comprehensive – we have well over 1,000 words and also focus on several regional dialects, which others don’t even attempt to do.”

Those dialects are covered in sections for Scottish, Scouse, West Country, and Yorkshire English, and Cockney and London slang. There’s even one for Australian English/slang.

I have a decent-sized Brit slang vocabulary and an almost nonexistent one for regional slang. With Anglotopia’s Dictionary of British Slang, I not only learned quite a few new slang terms, but also that a kit in Yorkshire English is something completely different from a kit in general British slang. Crikey.

Thomas states in the introduction that the Anglotopia dictionary is “geared towards viewers of British TV,” and as one, I appreciate his efforts. I also wondered if he had come across a particular slang term in his viewing that triggered the idea for the dictionary.

“I can’t say there’s a specific term – but I’ve been there – I have a working knowledge of slang and even I’ve been stumped from time to time.”

Me, too, even after countless hours of watching British television programs and movies, and especially shows such as Misfits and The Thick Of It, which I’ve found to be heavier on British slang (and cursing) than others. According to Thomas:

“The Thick of It is definitely one of our favorites and a great way to see true British profanity (though you need the DVD’s to hear it). Also the IT Crowd and Peep Show are also excellent sources of linguistic variation.”

And since no dictionary of British slang would be complete without a section on British insults, I asked Thomas about these, too, in the context of what his favorite British slang words are.

“This a touch [sic] question. I’m partial towards insults as you can use them on your fellow American and the meaning is lost on them. “Tosser” and “Wanker” are particular favorites but not for use in polite conversation. Mostly I like words that make negative things sound better – having a ‘row’ in stead of a fight or participating in a ‘scheme’ instead of a program/plan.”

Ditto. I’m also partial to expressions that have a particular descriptive quality to them, such as chuffed, gobsmacked, gutted, and knackered, each of which is included in Anglotopia’s Dictionary of British English. Others of my favorites, namely “a bit of hush” and “lie-down,” weren’t. I asked Thomas if he’d consider including them in the next edition, and he heartily replied…

“Yes! While we tried to be as comprehensive as possible, undoubtedly there are words we forgot to include. We’ve created a form that readers can fill out so they can submit words for us to consider for the second edition. There’s also a form in the back of every print book or you can fill it out online.

Which brings me to the British Slang Dictionary website, where you can read several pages of the dictionary and purchase it in paperback, electronic formats for tablets, and downloadable PDF and e-pub files. As noted, you can also submit British slang terms for possible inclusion in the next edition using the online slang submission form.

As more British TV programs make their way to this side of the pond, it’s likely that more slang will, too. So having Anglotopia’s Dictionary of British English

as a go-to viewing reference would prevent your going mad if you don’t know the difference between a bob and a bobbie or a snog and a shag. Beyond the telly, you’d raise your Brit-speak cred in knowing that not all punters are berks, divvies, eejits, gits, muppets, numpties, pillocks, plonkers, prats, sods, tossers, twonks, or wazzacks… and feel chuffed about it!

A Dictionary of Slang for British TV Viewers
Tagged on: slang