Well, the CDC was spot on about this year’s flu being the worst in years. After nearly three weeks of being flattened by the nasty bugger, I’m finally over it. If you, too, have been felled by the flu, here are some suggestions for (mostly) British TV programs to help you while away hours of bedrest while on the road to recovery. 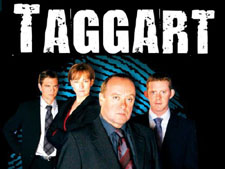 “There’s been a murder!” That bit of dialogue has become the unofficial tagline for the longest-running crime drama to date in the UK: Taggart.

Filled with compelling plots, engaging characters, and top-notch acting, it follows a team of detectives from Maryhill CID as they search for clues, killers, and other criminals in and around Glasgow, Scotland.

For much of the series, that team consisted of DI Jackie Reid (Blythe Duff), the sole woman and often sole voice of reason; DC Stuart Fraser (Colin McCredie), the gay rookie detective out to prove himself; DI Robbie Ross (John Michie), the cop whose womanizing ways can sometimes jeopardize cases; and DCI Matt Burke (Alex Norton), the bollocks-busting boss with cajones to spare.

The crimes themselves are standard fare for police procedurals (murder by gunshot, stabbing, strangulation to keep secrets hidden, people quiet, reputations intact, etc.). And while there are ample chase, beat-em-up, and other action scenes, it’s the dialogue and interplay of the characters that really move storylines along apace.

Taggart ran for 110 episodes over 27 series in 28 years. You can get roughly half of them on DVD, and stream the 25 episodes of Series 19-22 at Amazon Instant Video

and Netflix in the U.S. 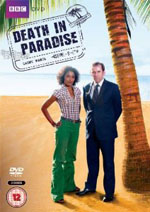 On telly, I discovered the mystery series, Death in Paradise.

The inspector on the (fictional) Caribbean island of Sainte-Marie has been murdered, and DI Richard Poole (Ben Miller) of the UK Metropolitan Police has been sent there to investigate. So begins this series of a fish-out-of-water detective who longs for the cold, rain, and grey of home while solving cases in the midst of tropical sun, sea, and sand.

One of the PBS stations in my area just started airing the series, so I’ve only seen the first episode, and my first impression is a good one. It has a Doc Martin feel to it, with its quirkiness, socially maladroit but professionally-skilled lead character, and bits of humor sprinkled throughout.

Death in Paradise isn’t available for streaming in the U.S. right now, so check your local listings to see if your PBS station is airing it or grab a copy of the Season 1 DVD. Season 2 is currently airing on BBC One in the UK; stay tuned for updates about it being shown in the U.S. 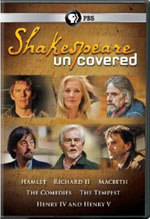 is brilliant. Each episode features a star of the stage offering up bits of background, interviews, and scenes from select plays of Shakespeare’s tragedies, comedies, and histories. Specifically: “Macbeth with Ethan Hawke,” “The Comedies with Joely Richardson,” “Richard II with Derek Jacobi,” “Henry IV & Henry V with Jeremy Irons,” “Hamlet with David Tennant,” and “The Tempest with Trevor Nunn.”

Shakespeare Uncovered is rich in its delivery of facts, interpretations and personal passions, and utterly fascinating and entertaining. And (imo) you don’t even have to be a fan of the Bard’s works or documentaries to enjoy it. You can stream all six episodes at PBS Video and Amazon.com. 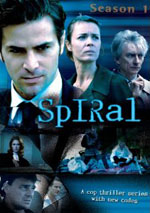 Lastly, despite my having been in a flu fog, the French crime drama, Spiral (Engrenages),

had me riveted to the screen. Gritty, violent and intense, this internationally-acclaimed series delves into the myriad ways in which individuals can spiral into corruption, cover-ups, and crime, no matter how noble the cause.

Not one of them is immune from having to choose between maintaining or compromising their integrity, between doing what’s legal and scrupulous and what isn’t to get evidence and a conviction or to protect one of their own or themselves. Treachery, transgressions, and conflicts abound, as do the criminals, who are as vile and heinous as the crimes they commit.

Shown in French with English subtitles, you can stream Seasons 1-3 of Spiral on Netflix, as well as catch weekly episodes on the MHz Worldview channel on broadcast, cable, and DirecTV in the U.S. Hopefully, Season 4 will arrive on this side of the pond soon. (It is currently airing on BBC Four in the UK.) Seasons 5 and 6 are in the works in France, and Neal Street Productions (which gave us the hit period drama, Call the Midwife) is developing an American adaption of the program for BBC Worldwide Productions.

What to Watch When Felled by the Flu
Tagged on: Death in Paradise    Shakespeare Uncovered    Spiral    Taggart
Add some love to our tip jar. Thanks!