Hooray! Not only is Alan Davies returning to stand-up comedy after a long absence from the stage, he’s reprising his best-known signature role — Jonathan Creek — for a new, one-off special. 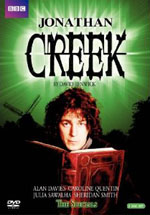 Set to air on BBC One at Easter, “The Clue of the Savant’s Thumb” sees Davies (The Brief,Bob & Rose) back as the titular Creek in his trademark hooded duffle coat, along with Sheridan Smith (Gavin & Stacey, Two Pints of Lager and a Packet of Crisps) as Joey Ross, the paranormal investigator who became Creek’s sidekick starting with the second Jonathan Creek special in 2009.

Said Davies about the special:

“The new story has more than the usual amount of twists and surprises, and I’m very much looking forward to sleuthing again. I can’t wait to join Sheridan Smith on set again; we’re very lucky to have her. It’s nearly 17 years since I first auditioned for the part; the duffle coat is always on standby, even if the periods of duffle-hibernation are quite long these days.”

And on the most recent episode of The Graham Norton Show, which aired on BBC America on 19 January, he added, “We might do more (Jonathan Creek episodes) later in the year, though. I’ve got my fingers crossed…” Ooh, let’s keep ours crossed, too!

(Discussion re: Jonathan Creek begins at roughly 24:50. Caution: Lots of naughty bits throughout the video. Not suitable for younger viewers.)

Jonathan Creek premiered in 1997, and for the first three series Davies starred as the magician consultant and mystery investigator alongside Caroline Quentin (Blue Murder, Men Behaving Badly) as Maddy Magellan, a crime writer. He later costarred with by Julia Sawalha (Absolutely Fabulous, Lark Rise to Candleford), who played Carla Borrego, the theatrical agent turned TV presenter, in the 2001 Christmas special and Series 4 episodes.

In “The Clue of the Savant’s Thumb,” Creek and Ross are drawn into a complex case involving a secret society, seemingly supernatural events at a girls’ boarding school, and the miraculous disappearance of a body in front of three witnesses.

No word yet on whether PBS stations or BBC America will pick up this Jonathan Creek special for airing in the U.S. Stay tuned for updates.