The list of U.S. remakes of British TV shows continues to grow. In the works are two programs: one that was a hit comedy in the UK, and the other a miniseries that was adapted and failed as a series for American screens more than a decade ago. 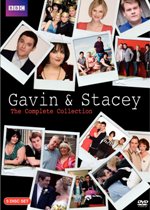 According to Digital Spy, “Fox has ordered a script for a US remake of Gavin & Stacey.” If you’re not familiar with the show, Gavin & Stacey

is a BAFTA- and British Comedy Awards-winning comedy that follows the long-distance relationship between two twenty-somethings: Gavin (Matthew Horne), who lives in Essex, England, and Stacey (Joanna Page), who’s in Glamorgan, Wales.

The main storyline focuses on their relationship, from meeting and dating to engagement and marriage, and the co-mingling of their friends and families. A secondary storyline follows the like-dislike relationship between their mates, Smithy (James Corden) and Nessa (Ruth Jones). Corden and Jones were the writers for the UK program, and they will serve as executive producers for the remake.

The Hollywood Reporter stated that, “Fox’s version will focus on the key life moments of the title characters as they try to maintain their relationship while combining their polarizing families’ lives.”

I liked Gavin & Stacey. If you haven’t seen it, it’s worth a watch.

Over at the CW, Rob Thomas, creator of Veronica Mars, is taking his second stab at adapting Metropolis for American audiences. The UK program was an eight-episode miniseries that aired in 2000 and starred James Fox (Sherlock Holmes), Louise Lombard (The House of Eliott), James Purefoy (<Rome), and Matthew Rhys (Brothers & Sisters).

According to Deadline, “Thomas will write and executive produce the project, about a group of friends who are struggling with their adult lives not living up to the expectations they had when they were idealistic college friends.”

I hope the U.S. versions of both shows do well. Statistically speaking, though, American remakes of British comedies and dramas haven’t fared as well as their reality and game/competition show brethren.

Programs such as American Idol, Antiques Roadshow, Dancing with the Stars, Hell’s Kitchen, Trading Spaces, and Who Wants to Be a Millionaire have been ratings hits. On the other hand, of the many U.S. versions that were green-lighted, Cold Feet and Coupling didn’t make it past the fourth episode; Payne (patterned after Fawlty Towers) made it to eight episodes; and Eleventh Hour, Life On Mars, and Prime Suspect lasted one season. Other remakes, such as AbFab, Football Wives (an adaptation of Footballers’ Wives), and The IT Crowd, never made it out of the gate. Clearly, not every remake has the kind of success with American audiences as The Office and Shameless have had.

It’ll be interesting to see what happens with the remakes of Gavin & Stacey and Metropolis. Will viewers in the U.S. take to them the way those in the UK took to the originals? Stay tuned.