Ah, costume dramas. They’ve been required viewing for British TV fans in the States for more than four decades. Some have even made their way into our lexicon, if not our collective consciousness, at least insofar as modern-day TV scripts go. To wit: Last night’s episode of The Big Bang Theory, in which Sheldon (Jim Parsons) made a reference to “upstairs, downstairs.” 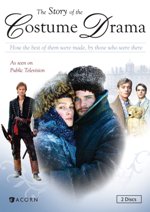 What is it about British costume dramas that piques our interest so much? Whether it’s the characters, the stories, the settings, or a combination of all the above and then some, it seems that our fascination with British costume/historical/period dramas is still going strong.

BBC America’s Copper has been doing gangbusters in the ratings for the network, and over at PBS, the new series, Call the Midwife, premiered to rave reviews, as it did in the UK at the start of this year. And of course, we wait with baited breath for the return of Downton Abbey in January 2013.

To find out what those who created and starred in some of the most beloved British costume dramas have to say about them and their popularity, we have the behind-the-scenes documentary, The Story of the Costume Drama.

This five-episode series (of which only the first aired on PBS stations this past Spring), narrated by Keeley Hawes (Upstairs, Downstairs), provides an inside look beyond the ornate clothing, sprawling manors, and addictive story lines that have riveted millions of television viewers for decades, and reveals how the often controversial sagas altered the television landscape and launched the careers of many young actors.

The 2-DVD set features stars and scenes from Brideshead Revisited; I, Claudius; Pride and Prejudice; The Jewel in the Crown; Poldark; Horatio Hornblower; Elizabeth I; Sharpe; Doctor Zhivago; My Boy Jack; Cranford; and many more costume dramas, and includes a bonus photo gallery.

Many of the programs explored in The Story of the Costume Drama were noted as the responses to the question, “Which costume drama do you think is the best to have graced Britain’s television screens,” posed in a 2010 survey of BBC Magazine readers. The twenty that received the highest marks were these:

Of those twenty, most made it onto the list of PBS viewers’ favorites, according to a survey conducted by the network in 2006. (Some programs aired on other networks, some had not yet aired or been produced at the time of the survey, and others did not air at all in the U.S.) To see the complete list, which includes both period and contemporary dramas, visit the Masterpiece Theatre “Best of” winners page.

Have an awesome weekend!