Sarah Alexander, John Hannah, and Robert Lindsay — no strangers to comedy — plus a spaceship with a cult following, will be returning to telly in new series from UKTV. 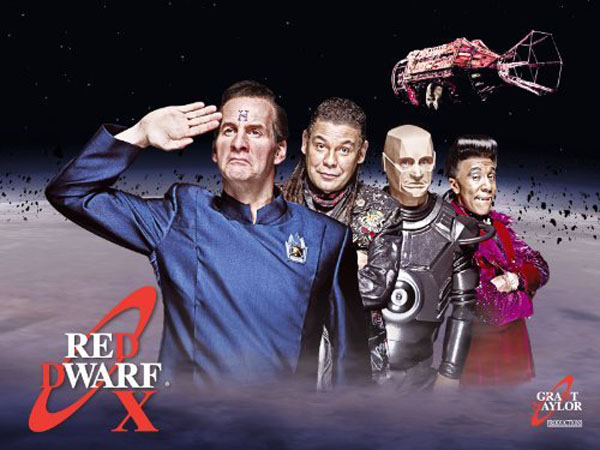 Over on UKTV’s Gold channel, John Hannah (A Touch of Cloth, Atlantis, Spartacus), Sarah Alexander (Jonathan Creek, Me & Mrs. Jones, Coupling), Jo Joyner (EastEnders, Ordinary Lives), and Nicholas Burns (The World’s End, Benidorm) lead the cast of Gold’s new three-part scripted comedy series, Marley’s Ghosts, which is nearing or at the end of filming in and around London.

Marley’s Ghosts is a high-concept, single-camera sitcom about a woman, Marley (Alexander), who has a rare gift that comes with mixed blessings: She can talk to the dead, which sadly now includes her husband Adam (Hannah), lover Michael (Burns), and vicar (Jo Joyner).

Written by Daniel Peacock and produced by John Stanley Productions, the series is directed by Ben Gosling Fuller (Bad Education, Pramface, You, Me & Them), produced by Katie Mavroleon, and executive produced by Layla Smith.

Another of Gold’s new scripted comedies is Bull, a three-parter that stars the BAFTA Award-winning Robert Lindsay (My Family, Atlantis) and Maureen Lipman (Coronation Street). This studio comedy centers on the eponymous Rupert Bull (Lindsay), who tries to run his antiques shop with dysfunctional staffers that both help and hinder him, including Beverley (Lipman), Faye (Claudia Jessie, Doctors), and Toby (Naz Osmanoglu, Horrible Histories).

Lastly, there’s Henry IX, a single-camera series for Gold, set in the fictitious, contemporary court of Henry IX, King of the United Kingdom. This is the almost universal story of a middle-aged man trapped in his life, except this particular man happens to be the reigning monarch.