The 2014 US midterm elections are next month, so it’s apropos that the political drama, The Politician’s Husband, makes its broadcast debut on local public TV stations around the same time that we head to the voting booth.

is a gripping tale of relentless ambition, political machinations, and the unbridled quest for power, set in and around the world of Westminster.

The three-part miniseries stars David Tennant (Broadchurch, Doctor Who) as Aiden Hoynes, a senior cabinet minister of Parliament, and Emily Watson (The Book Thief, War Horse) as Freya, his wife and fellow politico. 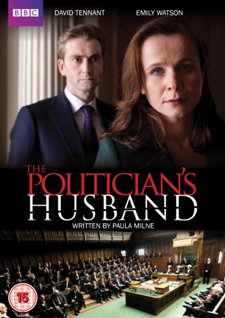 Aiden’s fall from grace following his failed leadership bid and subsequent resignation results in a cabinet reshuffle and political payback in the form of Freya being offered a cabinet post.

As Freya rises to political prominence, Aiden wallows in self-pity and grows in paranoia and jealousy, yet still plots and schemes to use her growing power as his means of entry back into Parliament… with 10 Downing Street as his ultimate objective. Only she is no one’s puppet and has ambitions of her own.

The strain on their marriage is palpable, and their relationship devolves to the ugly (and even violent) behind closed doors. In front of the cameras, though, the Hoynes are hunky dory, thank you, until a scandal erupts and makes headlines.

Perhaps all PR is good PR, as Number 10 becomes the Hoynes’ new home, but dreams that come true aren’t always the reality one had imagined.

The stations below are confirmed for airing The Politician’s Husband

starting the 1st of November 2014. Check your local listings or contact the station serving your area for broadcast dates and times.