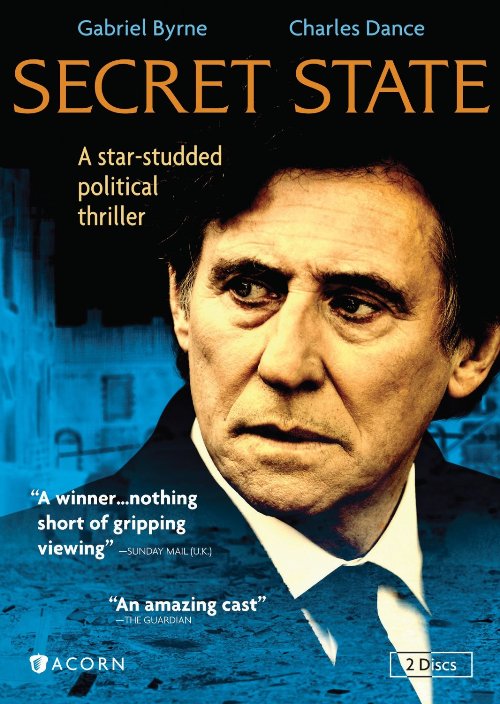 adapted from the 1982 novel A Very British Coup by former British MP Chris Mullin (which was re-released in 2011 under the TV title Secret State),

is a taut political thriller that feels as real as the front-page news we read every day.

The four-parter stars Gabriel Byrne (The Usual Suspects, In Treatment) as Deputy Prime Minister Tom Dawkins, a political moderate who prefers being on the sidelines than in the limelight. But when an explosion at the PetroFex refinery in Scarrow kills 19 people and injures 94 others, it is he who represents the country’s leadership to the citizens in the north — and the one who must get to the bottom of the accident and secure justice for the victims’ families.

Prime Minister Charles Flyte (Tobias Menzies, Rome) has been at PetroFex headquarters in Houston, Texas for other matters, and after learning of the tragedy negotiates a compensation package for the families with PetroFex head Paul Clark (Stephen Dillane, Game of Thrones) before he returns to 10 Downing Street. Except he doesn’t make it back. His plane goes down over the Atlantic.

Jockeying to fill the now-vacant PM position are the aggressive Foreign Secretary Ros Yellend (Sylvestra Le Touzel, The Politician’s Husband) and the smarmy Home Secretary Felix Durrell (Rupert Graves, Garrow’s Law). Their plans are foiled, though, when the scheming Chief Whip John Hodder (Charles Dance, Game of Thrones) convinces Dawkins, who is favored in the polls, to stand for PM, which he does. And he wins.

With the public and the press, including dog-on-a-bone journalist Ellis Kane (Gina McKee, The Forsyte Saga), demanding answers about what caused the PM’s plane to crash and why the compensation hasn’t been paid, Dawkins enters high office with a right mess on his hands. And it’s just the beginning.

The plane’s black box has not been recovered, but analysis of recovered plane parts show the crash was the result of an explosion. Was it due to a lightning strike or sabotage? The Scarrow victims’ bodies have high levels of toxic content that can’t be explained without information from PetroFex, but the company is stonewalling the pathogist. And tough businessman Clark claims no acknowledgment of the payout to the people of Scarrow.

Meanwhile, conscientious GCHQ staffer Agnes Evans (Ruth Negga, Love/Hate) has, on orders, tapped the phone and is listening in on the conversations of former MI-5 agent and Dawkins’ off-the-wagon friend Tony Fossett (Douglas Hodge, Middlemarch), who is helping the PM investigate whether the crash was the result of a plot. Evans has her own theory about the plane’s explosion, and Fossett receives information about Sami Sharour, an Iranian who had been on the ill-fated flight but not on its manifest. (Why?)

And Dawkins, under pressure from his advisors, gives the go-ahead for the drone killing of a known terrorist in Afghanistan, except the target was actually in Iran, whose government interprets the action as aggression and is readying for war with Great Britain. Was this another conspiracy to directly involve Dawkins in an international incident?

As tensions escalate at home and abroad and Dawkins’ actions put him at further odds with PetroFex, Royal Caledonian Bank, his fellow politicos, and even the public, the PM struggles to do what is right for the people of the country, a stand made all the more difficult after Kane publishes a story that unearths a skeleton in Dawkins’ closet from his days during the war in Bosnia.

The truth will out in the end on all fronts. The question is, how will Dawkins handle it?

Although likable characters are few and far between in Secret State,

the miniseries still makes for utterly compelling viewing. Byrne is excellent as a man who is desperately trying to hold it all together and act for the right reasons, and whose humanity compels him to displays of outrage when stuff hits the fan. His body language — intense face and tensed muscles through most of the four episodes — says it all.

Byrnes’ costars are also stellar. Le Touzel plays the power-hungry Yellend, she of icy glare and pinched facial expressions, as wholly detestable. Graves, too, brings the utmost in smug and smarmy to his Durrell. And Dance offers up shades of another of his machinating characters in his portrayal as the advisor-with-an-agenda Hodder.

The 2-DVD set for Secret State includes four bonuses featuring cast member interviews, including an extended one with author Chris Mullin, and behind-the-scenes footage of the sets for the House of Commons, Biggin Hill Airfield, and Downing Street.

is available in the US today.