Acorn TV, the first streaming service in North America that focuses on the best of British TV, today announced several significant changes to its service.

Available at www.Acorn.TV, on television via the Roku streaming media player,

on mobile devices that support the most recent version of Flash, and at the Acorn TV YouTube channel, Acorn TV brings many of the best British mysteries, comedies, and dramas, as well as select Australian, U.S. and Canadian series, to North American consumers who enjoy watching British television content via streaming.

Changes to the Acorn TV streaming service include a tripling of its available content, more exclusive U.S. premieres, and no set end dates.

“Given the limited broadcast options for U.S. viewers to watch high quality programs from outside the U.S., Acorn TV offers U.S. fans the opportunity to not only stream many of their favorite series but, more importantly, discover new and classic programs previously unavailable to U.S. audiences. We’re very excited about our upcoming premieres of the hugely popular UK series Doc Martin and Agatha Christie’s Poirot, as well as offering our customers much more of the best British mysteries, comedies, and dramas.”

Acorn TV has been steadily upping the number of full-season series that have been rotating on and off the streaming service every week since it launched in 2011. Moving forward, Acorn TV will add at least six new and classic series each month, as well as offer a catalog of 65 series for catch-up viewing and discovery of new series, with no set end dates. Acorn TV will also continue to offer its free 30-day trial.

Coming in Autumn 2013, Acorn TV will feature the exclusive U.S. premiere of Series 6 of Doc Martin,

the hit dramedy shown on many PBS member stations in the U.S. New episodes will debut soon after their UK broadcast. 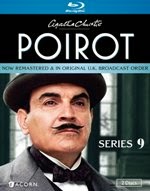 Also streaming this Fall are the newest episodes of Foyle’s War,

which will be available the day after they premiere on MASTERPIECE Mystery! on PBS starting 15 September, as well as Season 6 of hit period detective series Murdoch Mysteries.

And in early 2014, Acorn TV will feature new episodes from the final series of Agatha Christie’s Poirot

which is being remade by U.S. network ABC as Lucky Seven.

Additionally, Acorn TV will feature all previous episodes of many popular British series, including George Gently,

starring Derek Jacobi, as well as more than 50 episodes of Agatha Christie’s Poirot.

In the coming months, Acorn TV will add several of the most critically-acclaimed series in British television history, including Prime Suspect

With the increased availability of content, Acorn TV will cost $4.99/month or $49.99/year. However, new subscribers can still get it on the current $2.99/month or $29.99/year subscription fee until 2 September 2013, but only on the Acorn TV website. In addition to on-demand streaming of all the series that Acorn TV offers, subscribers receive free shipping on all orders from Acorn’s merchandise catalog at www.AcornOnline.com.