With all of the carnage we saw in the third series of Game of Thrones,

it’s no wonder that new cast members have been added.

A couple of weeks ago, it was announced that Mark Gatiss had joined the cast for the fourth season. Now there’s word that Indira Varma is following fellow Rome cast mate Ciarán Hinds (Mance Rayder in GoT Season 3) to the phenom fantasy series, She will play Ellaria Sand, the lover of the Red Viper, Prince Oberyn Martell (Pedro Pascal), another new character in the upcoming season, which will debut in 2014.

In a world without dragons, the tenth series of New Tricks

premiered earlier this week on BBC One, and is slated to make its way stateside next year. That’s the good news. The bad news is, fans of the hit crime drama on both sides of the pond will be sad to know that both Amanda Redman and Alun Armstrong will be leaving the show during this season.

Their departures follow that of James Bolam, who left the show after eight seasons. His character, ex-DCS Jack Halford, quit the Unsolved Crime and Open Case Squad (UCOS) in the opener of Series 9,

UCOS isn’t UCOS with just McAndrew and ex-DS Gerry Standing (played by Dennis Waterman), so former diplomatic protection officer Dan Griffin (Nicholas Lyndhurst, Only Fools and Horses) will join the squad in place of Armstrong’s character, ex-DI Brian Lane. And for the new head of UCOS, Tamzin Outhwaite (Hotel Babylon) is set to take over for Redman, who’s played DS Sandra Pullman since the series premiered in 2003. 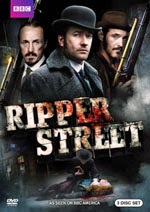 will debut later this year. Filming has started in Dublin, and there will be some new faces in and around H Division.

premieres on Sunday, 1 December at 10PM Eastern on BBC America.